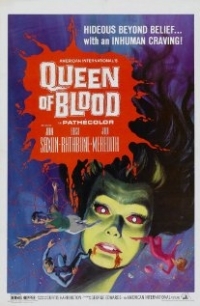 Everything screams cheesy about Queen of Blood. First of all, it stars hunky John Saxon, the excellent-browed, always-busy actor that appeared in his heyday in everything from failed Gene Roddenberry plots to Bruce Lee’s Enter the Dragon. The movie was made in the middle of the space race (1966), yet early enough where the technology was still a mystery—which is reflected in the earnestly-created sets with lots of panels, screens, and buttons. Shoot, the story is supposed to take place almost 25 years into the future, when we’ve got it all figured out, fer cryin’ out loud!

So, it is the future… 1990 (!) to be exact. “The problem of traveling to the moon has been solved for many years. Space stations have been built there, and authorized personnel come and go as they wish.” (Indeed!) People in the Astro Communications lab on Earth walk around confidently wearing quilted puffy quotes and butter-colored slacks. I immediately mocked the ubiquitous sci-fi coats until I suddenly admired them and thought, “I’d totally wear that!” One day, Earth receives its first signal from intelligent life from outer space… from Venus! The aliens are in distress, and need help!

Astronaut Allan Brenner (Saxon) is chosen to lead a mission to investigate the signals and rescue the aliens. To lend weight to the seriousness of the matter, the mission control lead is played by none other than Sherlock Holmes in a lab coat, Basil Rathbone himself! Not only that, one of the other astronauts is played by freakin’ Dennis Hopper (who lends his weird delivery to his hokey lines… did he sneak in some ad libs?).

When a Venusian is rescued, she is weak and unresponsive. And you know that she is trouble, as the title of the film is Queen of Blood. Let’s just say that alluring Florence Marly, with her green-rubbered hands, slinky painted-on outfit, and sickly tinge made for one genuinely creepy alien.

That’s what is so great about this film! By all accounts, it should be totally a non-stop cheese-fest—instead, I found myself surprised that I totally fell for it. Despite the corny dialogue and crazy cheap-looking sets (I enjoyed the view from the porthole, which was a bad matte painting of a moonscape), it ends up being quite watchable. Truth is, I kind of loved it!