This head-scratcher of an arty sci-fi film will either seem profound and beautiful, or will have you running for the exits in frustration. 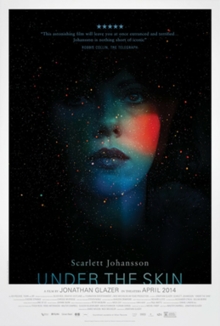 Under the Skin is one of those films, like the acclaimed head-scratcher 2001: A Space Odyssey, that will totally divide audiences. I’ve already seen early acclaim, proclaiming “Four stars!” and “We now finally have an heir to Stanley Kubrick!”

I’m not going to pretend. In fact, my friend laughed at the end of the film, because he said he looked over at me at one point, and I was just shaking my head in bafflement. There is a lot that is really interesting in Under the Skin, and a lot that either went right over my head, or was brain-numbing, excruciatingly too vague. It is a beautiful-looking film that doesn’t give you a lot of exposition to figure out backstory or motivation. In that sense, you are just like the main character, played by Scarlett Johansson, who is (apparently) an alien on Earth.

The film opens with vibrating violin screeches (yes, a soundtrack reminiscent of Kubrick), images of outer space, eclipses, eyeballs, and a female voice sounding out and repeating random words (as though figuring out a language). Eventually, a motorcyclist in Scotland picks up a (dead?) woman, and presents her to a naked woman (Johansson), who we eventually (supposedly) figure out is not of this planet. The alien woman views the body without emotion, strips off her clothes, and puts them on. Now our heroine is ready to go out on the town.

The alien drives around town in her white van (which looks like a cliched kidnapper’s van, except it is driven by a hot chick as opposed to a creepy guy with an arm cast). She is looking for men—specifically men who are alone, who seem to have no one at home, or whom no one who would notice as missing. She lures these men to a decrepit building with the promise of sex. They strip with enthusiasm, walk towards her, and into inky blackness. And… scene.

One of the alien’s marks is a man with a disfigured head (think The Elephant Man). The alien lures him, but she seems to feel… pity? Curiosity? Empathy? He is seen staggering home naked across a field, the only one to get away. This encounter apparently throws our heroine for a loop, as her own journey changes, maybe to try to find a connection with her own role in understanding humanity.

See, that description sounds like I got it! I got some of it. But, like other arty sci-fi films like Liquid Sky or The Man Who Fell to Earth, Under the Skin is sure to try the patience of the average viewer. I have to admit that it tried mine. So, I have to give it a split review: Sure there seems to be some original, intriguing ideas in there, and some admittedly beautiful, eerie images… but half the time I did want to scream in frustration and run for the exits. You’ll just have to decide for yourself if this film is up your alley.