“You know, hyenas wouldn’t take that long to kill someone. They are predators. They’d go straight for the neck and kill him instantly.”
By Lindaon October 12, 2013
0 Comments
Our Rating 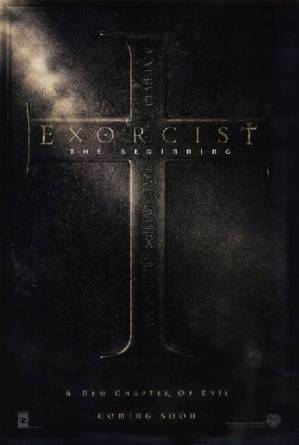 So said my pal Tim, as we sat stone-faced, and more than a little appalled, watching a scene in Exorcist: The Beginning as a boy got ripped and gnawed-on by a pack of hyenas. In a scene that goes on waaay too long, the wild dogs first take the kid down, then tear and pull at his limbs while the kid screams and screams, all while his little brother watches, pretty much with the same cold expression Tim and I had. Mercifully, after what seemed like several Passion of the Christ-length minutes gone by, the hyenas haul the kid—still screaming—off-screen, and I immediately picked up the DVD case to investigate how long this movie was (alas, that scene was merely the beginning—or, should I say, The Beginning).

Exorcist: The Beginning famously (or infamously) went through years and years of production hell (so to speak) as numerous hands tried to create the prequel to the classic 1973 horror film that scarred many-a-moviegoer’s minds. After directors like Paul Schrader (whose version wasn’t scary enough for the studio) and John Frankenheimer (who, um, DIED) tried their hands at bringing the movie to the big screen, it ended up in Renny Harlin’s hands. Now, judging from the extras on the disc, you’d think that Harlin was a filmmaking genius, but one just needs to look at his resume to see that it has all been downhill for his output since Die Hard 2.

The story attempts to explain how Father Merrin (here played by Stellan Skarsgård, and in the original by fellow Swede Max Von Sydow) got his hands into the messy exorcism business. After World War II, where, as a priest, his faith was broken by the Nazis (as we are shown in too many flashbacks), Merrin has become a vagabond archaeologist. He shows up in Kenya seeking a spooky artifact that may be found in a just-unearthed (and unheard-of) 4th century AD Christian church in the middle of Africa. The church isn’t just buried in the sand, but of course it turns out it was buried for a reason. (Cue dramatic screeching orchestra to drive home the point.)

Films with an archaeological theme have always interested me, and with the bonus of religious mythology, the filmmakers should have had me there. But director Harlin has no subtlety when it comes to scares. Every time something supposedly frightening happens, it is punctuated by a deafening “!!!!” explosion in the score. Walls shake, glass shatters, blood splatters, pustules rupture on skin, birds erupt out of dark corners, and on and on. And the whole time, poor Stellan Skarsgård, who is indeed a fine actor when given a script, looks visibly exhausted. I half expected a thought balloon to appear over his weary head, saying, “Dear Lord, why did I sign up for this?”

I couldn’t help but wonder what sort of Exorcist prequel could have been made with a real screenplay and a talented director. Certainly the original film scared the crap out of me, and had enough substance to merit a sequel. Instead Exorcist: The Beginning is a shameful, ultra-violent, and not particularly scary film that should have all associations with the original revoked as a punishment to those involved.