This production is beautiful (and I’m just talking about Romeo). Alas, a pretty face isn’t enough to make a compelling film. 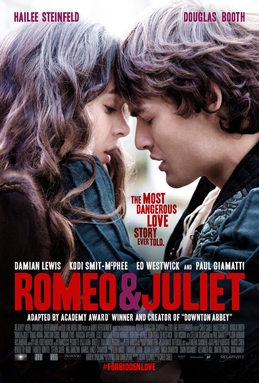 Whenever there is a new adaptation of ever-adaptable Shakespeare, there is an outcry from purists that will deride straying from the text. Or they’ll complain about sticking too close to the text. Or maybe scenes are added, or scenes are deleted. Or, heck, maybe some pop music is thrown in (hello, Baz Luhrmann!). I am no Shakespeare scholar, or even a huge fan for that matter. But taken at face value, this adaptation of Romeo and Juliet is a bit of a snoozer.

The young lovers, as we all know, fall in love despite the major obstacle that their families, the Montagues and the Capulets, hate each other. And I talking pull-out-your-swords-at-the-drop-of-a-hat kind of hate. But when Romeo (Douglas Booth) sees Juliet (Hailee Steinfeld) at a masked ball, he gets all googly-eyed, forgetting in an instant that he had just been crushing hard on one Rosaline. Moments later, Romeo and Juliet are making out behind a pillar. When everyone finds out, no one is happy. Though the lovers ask, “Can’t we all just get along?”, blood is shed, then blood is shed again, and next thing you know, we culminate in what could arguably be called the most famous tragic romance in English literature.

Now this is one gorgeous movie. The director, Carlo Carlei, is Italian, and has tapped into the wealth of that country’s talented seamstresses, artists, and yes, wig designers (who all get nods in the special features), to make this one fantastic-looking production. In the extras on the film, the cast is quick to praise the “authenticity” of the work that went into making it look awesome, which it does. You know what else looks awesome? Douglas Booth as Romeo. Booth is one pretty man. I couldn’t help but feel for his romantic co-star Steinfeld, who now knows what many leading ladies have experienced when cast opposite Johnny Depp: It is simply unfair when the leading man is the prettiest person in the cast.

That said, Romeo and Juliet don’t have a lick of chemistry. Their performances are earnest, and Booth in particular seems like he almost has it… whatever that “it” is that makes Shakespeare’s words actually sound like real dialogue. But unfortunately the leads are outshined by everyone else, from Paul Giamatti as Friar Laurence, Damian Lewis as papa Capulet, and even Lesley Manville as Juliet’s nurse. I was happy to see that young Kodi Smit-McPhee (as Benvolio) is developing into a fine actor. However, when you don’t believe the romance in the ultimate romantic story, it is kind of hard to stay emotionally involved. That, alas, is the case with this adaptation of Shakespeare’s classic.