SIFF 2008: A Battle in Seattle for Opening Night freebies

1) Buzz: SIFF has been advertising the heck out of this year’s opener, Battle in Seattle (6/8), which has been building a huge buzz, mainly out of curiosity, but also because of Seattle’s penchant for being a town of unabashed movie-star whores (bonafide superstar celebrities don’t show up here often, so we get star-struck, all stammering and blushing). When it was announced that a bunch of the stars would be in attendance, especially glamorous Oscar-winner Charlize Theron, tickets to Opening Night were snapped up in a frenzy (while still maintaining our Seattle nonchalant cool). 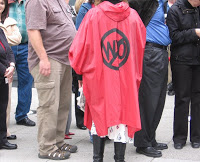 2) George W. Bush: GW wants us to use our “economic stimulus plan” money to go shopping. You know, go out and buy cheaply made products from China and Indonesia from retailers that underpay their employees, and thusly revive our sagging economy. Well, I’ve decided instead to use some of what I call my “GD-GW” money to support local arts. The lucky recipient this week? SIFF!

So, slacker I am, I decided on the day-of to give Opening Night a whirl. Fate would decide whether I made it into the sold-out event. I got up at the ass-crack of dawn so that I could leave work early. Luckily, when I got to McCaw Hall at 5pm, there were only 4 people waiting for tix! I knew my chances were good. By 6:20pm, I had a ticket in my hand. 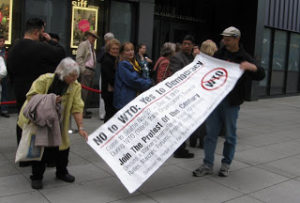 Let’s just say, because of the obvious local interest in Battle in Seattle, the air was electric. As per usual Seattle events, there were folks all gussied up in their finest mixed with folks in hoodies, jeans and flip-flops. However, unique to this year’s Opening Night were folks handing fliers like “RESIST The World Trade Organization” (www.realbattleinseattle.org) and unfurling banners that were used in the actual WTO protests in 1999. I’ll bet it wasn’t like this in Toronto!

After folks got shuffled into the huge, packed hall, and were subjected to the expected “thank our sponsors” bits, the celebs came out on stage. Director Stuart Townsend was joined by Michelle Rodriguez, Martin Henderson, Andre Benjamin (who, surprisingly, got the most enthusiastic applause), and, of course, The Charlize. A nice moment was when Townsend explained that at previous fest screenings, like in Toronto, one or two people in the audience would raise their hand and say, “I was there!” So he asked us: who was there at the WTO in Seattle? At least 2/3rds of the audience rose their hand (and the rest were probably still in the lobby drinking $12 glasses of wine). Townsend’s response? “Oh, shit.” 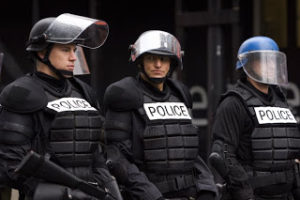 As for the movie itself? I’m sure everyone in the audience came prepared for the worst, donning their pointiest Skepticism Hats. Saddled with the dorky name Battle in Seattle and facing what will probably be their most critical audience, the filmmakers and cast were unsurprisingly nervous. But I have to say after a clunky start, the film actually got better. Some original footage is interweaved in the story (at the beginning, this is done quite poorly… a swelling crowd of thousands suddenly looks like a couple hundred, depending on if the actors are in the shot), and thankfully real Seattle sites are used in crucial scenes (we can spot Vancouver a mile away, and much of this film was shot there). It was strange to see The Paramount Theater so prominently used, as I walk by that building every day on the way to work. But I was impressed that they bothered, for the most part, using real, recognizable landmarks, which I know the Seattle audience appreciated.

The movie has a collage of characters, including Woody Harrelson as a Seattle cop, Charlize Theron as his pregnant wife who gets caught in the downtown melee, Ray Liotta as the mayor (who shows a bit more spine than our real mayor at the time, Paul “I am not a wuss” Schell), and Martin Henderson, Michelle Rodriguez and Andre Benjamin as protesters. The characters aren’t particularly well-developed or even individually very interesting, and the dialogue is admittedly corny at times (Connie Nielsen has a thankless eyeball-rolling role as a reporter who suddenly gets a conscience), but as the film moves along and the situation gets worse, the overall tension of the big-picture situation believably builds. There are several scenes of police brutality that will make you wince, both physical attacks and images of peaceful protesters getting sprayed in the face by chemicals while sitting cross-legged in the street. Yikes.

Did the film deserve its standing ovation from the audience? No. But the movie is not bad, and won’t need to be disowned by the city. At one point (I’m paraphrasing from memory here), Andre Benjamin’s peaceful “save the turtles” protestor says, “A week ago, no one had even heard of the WTO! Now… well… they still don’t know what it means, but they’ve heard of it!” 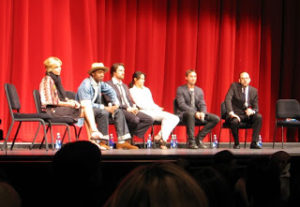 After the film, the cast and director came out for Q&A, and politely answered even the most expectedly inane questions from the audience (“How did your role in Battle in Seattle differ from other movies you’ve been in?”). Henderson won points for his passion and “fight the power” gusto, Benjamin was the most honest and charming, and Theron (who was losing her voice) has perhaps taken the most impressive action with her charity Charlize Theron Africa Outreach Project. And, well, Michelle Rodriguez drives a Prius. Guess you have to start somewhere.

As for my overall Opening Night experience? I had a blast. Was it worth $50? Of GD-GW’s money… a resounding yes! Of my own money? No, probably not. I walked away with a couple program guides and the curious freebie of a jar of Fennel Salt from a sponsoring restaurant (other people looked excited, so I’m excited!). The post-party involved all 3,000 people pouring out into the courtyard area to fight over free cupcakes and put out even more money for more drinks (didn’t drinks used to be included with the ticket?). I shoved one of the tiny cupcakes into my mouth, and fled. After all, the REAL fest starts on Friday…. 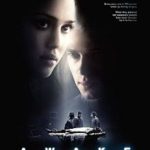 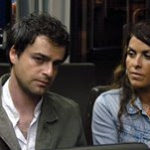