Yep, I took another couple days off from SIFF. I must not be the only one suffering from film fatigue because SIFF was offering their members a 2-for-1 ticket deal for any screening between Sunday and Tuesday! Hopefully they were able to fill up some of those empty seats. I always feel bad for visiting filmmakers when there is only a sparse audience for their screening.

That said, the special presentation The Land of the Head Hunters (6/8) at the vast old Moore Theater was packed. This was truly a special presentation, as Edward S. Curtis’ film originally had its world premiere at The Moore in 1914 (how cool is that??). Apparently there were only two surviving copies of the film remaining, both in bad condition, when the restoration began. The best of the surviving footage was taken from both copies, and when a piece was beyond saving, still images (both from the film, and from Curtis’ famous photos) were inserted. This worked surprisingly well, though sometimes had unintended comic effect–specifically a moment where two warriors were wrestling atop a cliff, getting closer and closer to the edge. Then there was an abrupt cut to a still shot of one lone warrior peering down to the rocks below, supposedly at the carcass of the loser. This caused giggles in the audience. 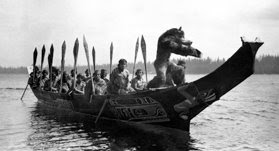 The basic plot of the film is a love story ripped apart by warring tribes. The son of a chief loves the young woman in the next village. They decide to marry, despite the fact that she has been promised to the creepy Sorcerer. Our hero has an elaborate wedding party, highlighted by fantastic images of majestic canoes landing in the village, each with a dancer at the front of the canoe: an Eagle, a Bear, a Raven. But drat! The Sorcerer rounds up his own warriors, hops in a war canoe to the wedding (violently killing unsuspecting fisherman and clammers that happen to be in the way), and grab the girl. Don’t worry though… the bride does manage to get rescued by her one true love by the end. And lots of severed heads are waved around triumphantly (the heads, by the way, looked like the size of coconuts with lots of shaggy hair… I couldn’t help but think of that line from Jerry Maguire “Did you know that the human head weighs 8 pounds?”)

The rest of the evening was warmly hosted by members of the Kwakwaka’wakw First Nation from Alert Bay, Vancouver Island, British Columbia. Their dancers, many of whom are descended from tribe members featured in the film (the audience audibly cooed when it was pointed on that one man was the grandson of Naida, the bride from the film), performed several numbers accompanied by thundering drumming and chanting. Their gorgeous costumes (I coveted the women’s beautiful robes), dances, and fantastic wood masks (especially the clacking beak of the huge Raven mask) delighted the audience. I was reminded of what a great venue The Moore was, as a lone female singer’s unamplified voice filled the air all the way up to the balconies. The Moore may be a little rickety compared to the lovingly restored Paramount Theater, but it is still a great place to see a show.

(For more information on the background of the film: www.curtisfilm.rutgers.edu) 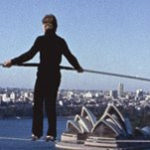 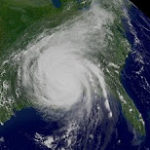