My Wednesday night o’ SIFF’n featured, hands-down, the weirdest double-feature I’ve ever sat through. In short, I went from seeing truckloads of WWII Polish military officers get shot in the back of the head, execution-style, to modern smiling, fake-eyelashed, bedazzling women twirling tassels off their womanly assets. The transition made me rub my eyes a few times.

First up was famed Polish director Andrzej Wajda’s Oscar-nominated film Katyn (4/8), a movie of great importance with a super-powerful climax that otherwise came across as muddled, disjointed, and rather uninvolving. Spanning from 1939 until after the war when the Soviets occupy Poland, several folks are followed, including a Polish general, an officer, a pilot, and the families/sisters/children that are left behind. None of the characters are explored with very much depth, and it doesn’t help that some are children at the start of the film and are adults at the end. It is unfortunate the that film was only so-so, as it is obviously portraying a huge incident to the Poles, where 12,000 officers, scientists, intellectuals, and artists were massacred in the forest of Katyn by Soviets, who then turned the “official” blame on the Nazis when the war ended, literally rewriting history. The last 10 or 20 minutes are shocking and unbearable, showing the victims’ fate, but everything leading up to it was unfortunately not too gripping. 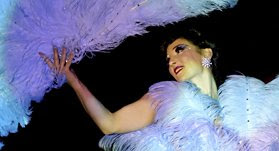 In the corral of folks staying for the next film, I was not surprised to see at least one man with his head in his hands, mulling the sadness of the previous film. So it was a bit surreal when folks started pouring into the theater bedecked in glitter, boas, slinky dresses, and lots of feathers, to the tune of a very smiley woman working an accordion. The world premiere of the locally-filmed A Wink and A Smile (6/8) was obviously the hot ticket (comparable to last year’s Blood on the Flat Track), with all the hipsters and their boyfriends and girlfriends and partners showing up for the party atmosphere. The film, featuring local burlesque star Miss Indigo Blue (a totally cute, charming, articulate, and funny host), follows a class of women taking Burlesque 101. The women share their insecurities (from body image, to self-confidence, to dancing skills, etc.), some tearfully, while they learn the tricks of the trade over six weeks. The film is a crowd-pleaser, with snippets of locally renowned burlesque dancers doing their acts (some are really fantastic and unique), mixed with interviews of the women, all of whom are interesting and endearing. I especially enjoyed the adorable 50-something mom (who incorporated whistling and birds into her routine), and the sassy taxidermist, who took the audience on a hilarious tour of the interesting frozen critters she was saving in her freezer (sorry, ladies, I forgot your names!). This film will be making the film festival circuit, and is fun and inspirational if you get a chance to catch it.