For the second year in a row, SIFF has hosted a “Gay-La”, featuring a Film of the Gays, followed by a party afterwards. In theory, this is a great idea, and can often bring out (so to speak) an enthusiastic target audience. But it is unfortunate that out of all the movies out there, the Gay-La featured the disappointing Kiss the Bride (4/8) (then again, I would not be surprised if the pickings of Quality Gay Movies were rather slim). Now, you can count me a fan of director C. Jay Cox’s last outing, Latter Days, so I had my hopes up for this film. There was actually early positive buzz for Tori Spelling’s performance as a bride waiting to find out if her fiancé will be lured by the wedding’s surprise guest, his long-lost high school boyfriend. Alas, for me the film’s two pretty-boy leads blurred together in looks for the first chunk of the movie, and the sitcomy quality of the writing (not to mention the music) didn’t work for me. Some of the audience was appreciatively guffawing, but it only reminded me how the bar is set lower for gay comedies. But yes, Spelling gave a surprisingly warm performance, and the concept of trying to re-ignite a lost love (and obsession) from the past was a potentially good one. Too bad the movie was only so-so. 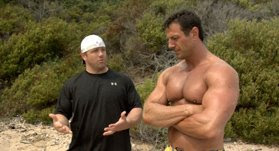 The next day, Friday, I got to work early to finish a project so that I could sneak off for a 4 o’clock screening (“Where the heck do you think you’re going???” my co-workers gasped as I darted out early). I wanted to check out Bigger, Stronger, Faster* (6/8) which had a great and funny trailer, and has the potential to be this year’s documentary hit. In the same funny investigative style of Michael Moore, first-time feature filmmaker Christopher Bell, a bodybuilder himself, delves deep into the world of steroid use in America. In 2005, the U.S. Congress spent more days (8) discussing steroids in baseball than they spent discussing health care and the Iraq War. What can you say to that? “It’s America’s pastime!” the senators cried, some of them passionately upset. Whatever. Are steroids proven to be bad for you? Everyone says so, but none of the interviewees seem to come up with concrete data. Are artificially bulked up athletes cheaters? Sure, it’s hard to argue with that. But what is most moving about Bell’s documentary are his profiles of his two brothers, a bodybuilder and a wrestler. They depend on steroid use to have a fighting chance to compete in their fields. But they are still not the best — there is always someone bigger and stronger. It’s the American way: no one wants to be second place. It is a fascinating (and entertaining) film. 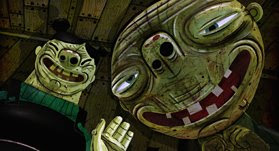 Finally, to top off my work week, I hit one of the shorts programs, Friends and Family (6/8). Despite Seattle’s The Stranger dubbing a whole weekend of shorts at SIFF Cinema “The Shorts Ghetto”, I was reminded of that fact that there are many gems to be found in these screenings. A couple of my favorites in the program included Peter and Ben (7/8), an adorable documentary-like piece about a man and his pet sheep (it actually made me a little teary at the end), and the fabulous and twisted animated The Pearce Sisters (8/8), about two, well, homely sisters who pick up a fisherman who washed up on the beach (turned out this film was a product of Aardman Animations… no wonder I loved it!). 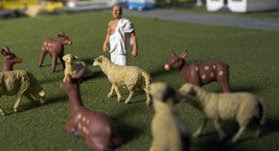 Of course the real reason I chose this particular screening was because my writer pal Joel Haskard’s film Train Town (6/8) was included. It is a twisted little tale of two bickering men who run a model train shop, who take turns manipulating (in sick and wrong ways) the townspeople of their model train town. Good job, Joel… it was funny (and a little jarring) to see you up on the big screen for your cameo! 🙂