SIFF 2008: Past evil, fast trains, and other thrills 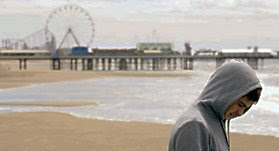 Per the recommendation of my TIFF’n pals Eric and Vickie, I picked up at ticket to the British drama Boy A (7/8). I didn’t know much about the film going in, as it had been a long time since I had read their reviews (here, and here), but it turned out that this is the perfect kind of movie to see completely cold, as its mystery is slowly revealed. We meet a shy 20-something man being released into the world. He chooses Jack as his name, and it is unclear what his deal is. Is he in a witness protection program? Was he institutionalized? Did he commit a crime? He doesn’t have basic social or living skills, seems younger than his years, but has a disarmingly sweet and trusting smile. He is set up with an apartment, placed at a job (that isn’t given too many details about his mysterious past), and even gets a girlfriend. But there is an ominous tone to the whole thing, as bit by bit his past is revealed. Andrew Garfield, a young actor I had never seen before, completely carries the film as tormented and sweet Jack, and Peter Mullan shows up as his rehabilitation contact, the only one who knows of his past. Boy A is a fascinating drama, with a completely fresh plot that I was wholly involved in. Hopefully you were able to catch it at SIFF, but otherwise it will be released in theaters later this year. 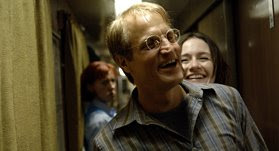 My second film of the day combined two things that rock my socks off: cold, wintry climes (in this case, Russia’s Siberia) and trains (woo-woo!). There hasn’t been a memorable train movie that I can think of since Runaway Train, but Transsiberian (6/8) will invoke some of the most enjoyable cinematic train thrillers. Woody Harrelson, doing his best “aw-shucks” American persona, and Emily Mortimer play Roy and Jessie, a married American couple returning home from a save-the-children volunteer stint in Beijing. They’ve decided to take the long way home, across the Asian continent on the Transsiberian Railway.

You know that all sorts of shifty things happen on trains, so their nice little jaunt takes a mysterious turn when they are joined in their cabin by a couple of backpackers, the shifty yet super-hunky Spaniard Carlos (the super-hunky Spanish actor Eduardo Noriega) and his quiet and nervous American girlfriend Abby (Kate Mara). Tension racks up with people getting left behind at train stops, drug runners looking for missing loot, detectives (including Ben Kingsley playing Russian) looking for the drug runners, and sexual tension escalating between characters. The film is as non-stop as a train hurtling across the dusky, snowy plains, and it was a delight to see Emily Mortimer get a complex role where she isn’t a complete angel or victim. Ray may be as simple and good as he seems, but Jessie’s got things in her past that she is not revealing. Transsiberian is a fun, claustrophobic thriller that had many in the audience (including myself) covering their eyes. And next time I’m on a train, I’m going to make sure the windows open. You know. Just in case. 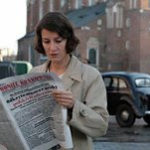