Metro, bless its public transit heart, can be a blessing and the bane of my existence. With the week off, I carefully planned which bus to hop to allow time to get a delicious cuppa before the press screenings, but in this case I happened to catch The Slowest Bus in the World. As my bus also travels through Crazy Town, I also got to hear Tourette’s-style cursing throughout my whole meandering trip downtown, as the guy behind me proceed to call the driver all sorts of colorful name-calling as we crept along, accumulating more and more passengers. This morning also was an example of how, despite sitting on my butt for three and a half weeks of movies, I also get a surprising amount of exercise. Running from 3rd Ave to the top floor of Pacific Place on 7th Ave still got me there 2, count ’em TWO minutes late for the first screening. DENIED! Drat. But at least I had time for a walk on one of the first nice days in awhile, AND had time for a leisurely cuppa. Not too much to complain about. 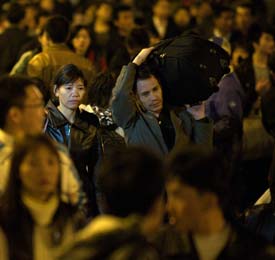 The first film I caught was Last Train Home (5/8), a beautifully filmed documentary with a sad narrative. Every year at the New Year’s holiday, 130 million migrant workers in China perform the world’s largest human migration as they try to get home for the holiday to see their families. For most of them, this is their only chance in the whole year. The film follows couple Changhua and Sugin Zhang as they struggle to get passage for their 2100-mile annual journey home, where they left their kids to be raised by their grandmother. Teenage daughter Qin is super-bitter, seeing her parents as having abandoned her, where the parents actually left to work to give their children a better future. The family is completely fractured because of this, but they are stuck in a classic Catch-22. The daughter doesn’t want to be a peasant, because that life is “sad”, but the parents don’t want her to be a factory worker, working long hours for poor pay. Director Lixin Fan worked as an associate producer/soundman on the acclaimed documentary Up the Yangtze, which had a similar feel to this film (but admittedly a stronger narrative). Still, Last Train Home has some heartbreaking scenes, and I’ll never forget the amazing and frightening images of thousands of people crammed together at the train station, waiting for days to get a cherished ticket home. 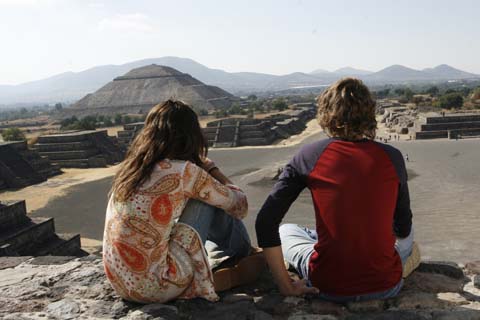 During the festival, I always find odd and unexpected patterns. A few days ago, I saw my first film from Uruguay. And in my second film of the day, I Miss You (Te Extrano) (5/8), the narrative crosses a multiple countries and ends up in… Uruguay! Hmmm… I see a vacation coming on… Anyway, the story starts in lat 1970s Argentina, as unrest is swelling in the streets of Buenos Aires, and political dissidents are rebelling against the dictatorship. Two brothers, teenage Javi and his older military brother Adrian, are both fighting the man in their own ways. But the much more involved Adrian suddenly goes missing, and out of fear the boys’ parents send Javi to his uncle’s place in Mexico for safety. Rather than elaborating much on the politics of the situation (which for me, would have helped flesh out the drama), the story is more about Javi dealing with his brother’s disappearance, and his helplessness of being abroad. Not much is resolved, and there is a small postscript talking about “the disappeared”, but I found myself wishing for more context of the whole situation.</p