Our little heatwave wrapped up last night, and it happened within the two hour span of time in which I was sitting in the theater! As I walked to the Harvard Exit after work, it was still a sweltering 90-ish degrees. I should have known things were in the air when I saw a giggling man (obviously altered on something) rolling like a log across the sidewalk on one of the side streets off Broadway (and how no one even acknowledged the curious site).

Because when I came out of the movie around 9:00, the temperature had dropped about 25 degrees, and there was a river of petals rapidly flowing down the street in the wind, and all the leafy trees were doing the crazy boogie-oogie shake. Not only that, but with all the construction (and pollen and grass) in the area, there was a whirlwind of grit and sand flying everywhere, with chunks getting into my eyes as soon as I took one blink. Strange, strange weather. 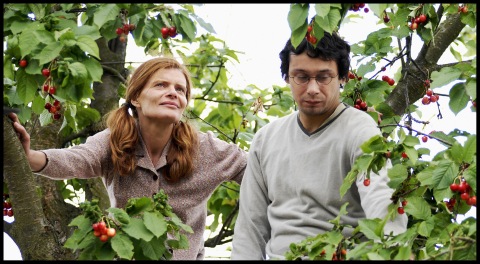 Czech director Bohdan Sláma is one of this year’s SIFF Emerging Masters, so I caught his latest film. A complex, quiet, character-driven tale, The Country Teacher (Venkovský ucitel) (6/8) was extremely well-acted and beautifully shot. However, this story of a gay, sort-of-closeted urban man who goes to the countryside to teach in a rural school introduced a troubling plotline that made me silently plead with the film and character, “No no no… please don’t go there… damn.” It becomes a tale of forgiveness, especially between friends, as teacher Peter (Pavel Liska) crosses a disturbing line in the world of his only friend in town Marie (the fabulous, earthy and soulful Zuzana Bydzovská), a single mom of a teenager. The friendship between Peter and Marie was real and powerful on film, and it seemed such a rare thing to see a true connection between characters who are such obvious kindred spirits despite their completely different life experiences. That made the subplot all the more disturbing (and disappointing, really). Do such things happen? Sure. But at the same time, do we need a film, especially these days, to continue harboring such stereotypes of fear about The Gays? I sure wish we didn’t. Still, despite my squeamishness, I thought The Country Teacher was fascinating and involving.

PreviousSIFF 2009: Gay girls and love for zombiesNextSIFF 2009: Auto-erotic asphyxiation (not me!) and takin’ a couch day