Whoah. I knew it would all catch up to me. After taking a week off from work (i.e. My Real Job) to go to SIFF last week, I was out late Friday night for a couple of movies, then left early on Saturday morning with ‘Pie Pal Jen to go to Astoria, Oregon for The Goonies 25th Anniversary Celebration (which will be another blog post later). It was a weekend packed full of fun, but on the drive home on Sunday, I couldn’t deny that my throat was scratchy. Normally, it is Post-Festival Sickness (PFS) that fells me after SIFF, but it turns out I finally caught the crud that has been festering in my office the past couple of weeks.

Anyways, before all The Sick, I did see a couple movies right before I left town. And the unorthodox double-feature is one of the things I love about going to film festivals. Two completely different films made with passion, one a documentary, and one a feature debut, six years in the making. 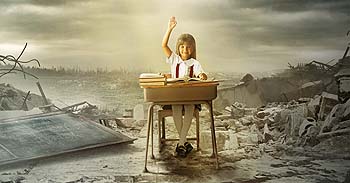 The first film was the much buzzed-about Waiting for ‘Superman’ (6/8), which is a data-filled dissection of the American public education system. Namely, what the hell is wrong with it. The film is always engaging, if overwhelming with all of its facts and figures. I couldn’t help but think this almost-two-hour movie would have made a better 12-hour mini-series, so that it could really dig into all the various aspects of its subject, rather than give us short sound bites and a mass of facts and figures. The film is critical of teachers’ unions as well as the bureaucracy of the education system, and gives a lot of praise to a handful of alternative ideas, including innovative teachers as well as charter schools. These glorious solutions are good and all, but how the heck can they be implemented while all those dumpy schools (labeled “dropout factories”) continue to fail students? It is a frustrating and emotional topic, and it is hard not to be moved by the faces of the profiled children as they sit and wait for their numbers to be chosen by lottery so they can attend a better school. With heartbreaking reality, most of them are not picked, and I almost felt worse for the parents than for the kids–the kids really don’t understand the impact their local failing school holds on their futures.

The next film I was quite excited about for personal reasons. Like Entertainment Weekly having to occasionally add a disclaimer when they review something that has the same parent company of Time Warner, I have to add the disclaimer that Meet Monica Velour‘s director Keith Bearden and I also share the same parent company… which would be The Evergreen State College way back when in the early 90s (am I dating myself). Keith has done good since we were college buddies, as his first short film The Raftman’s Razor won not only the 2005 SIFF Audience Award, but also the Jury Award (a rare two-fer). So I was excited to see what he could do with a feature film. 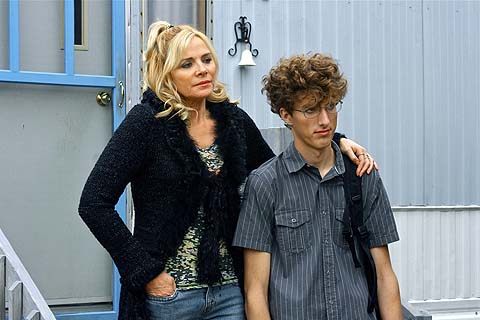 Meet Monica Velour (5/8) stars Kim Cattrall as a washed-up 80s porn star living in a trailer in small-town Indiana. That may not sound like much of a stretch for those who know her as the sex-pot Samantha from Sex and the City (I adore her in that show), but really the only thing Monica and Samantha have in common is that they’ve both slept with hundreds of men. The curiously sweet comedy setup framing the story is a visit by an obsessed 17-year-old boy named Tobe (Dustin Ingram) who drives across the country in the family weenie van to meet his idol, Ms. Monica herself. Tobe is a lanky, beaky, mouth-breather who is a bit naïve to think that his idol would be interested to meet her apparent number one fan, but his earnestness is kind of endearing (if sometimes kind of creepy and stalker-ish). Among the other quirky supporting characters are crusty old Brian Dennehy as Tobe’s grandpa (he gets some solid laughs, as well as a shriek and cover-your-eyes moment), and the kind of wonderful Keith David as an artist/pop culture collector who has a barnful of kitsch out in the middle of a corn field. The film sometimes struggles with its uneven mix of quirky comedy and melancholy world-weariness–it sometimes works, and sometimes doesn’t. And despite Tobe’s coming-of-age journey being the center of the story, I actually found Monica Velour (aka Linda, her real name) to be the more intriguing character. There is nothing Samantha-ish in Monica because she has absolutely no power in her situation. Her career has tossed her aside, and so has society… but the adoration of a naïve young man ends up bringing a little bit of light into her life. It was Kim Cattrall’s performance that surprised me by kind of breaking my heart. 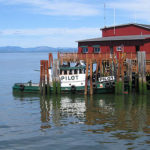