SLGFF 2009 #5: Keep your daughters away from lesbians! 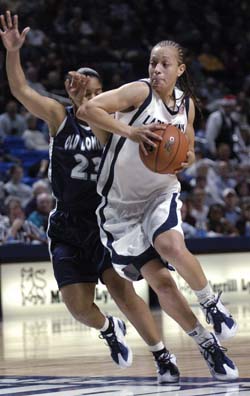 These were the guidelines that Pennsylvania State University’s famed and successful women’s basketball coach Rene Portland demanded of her student players. If Portland suspected a player of being gay, or even hanging out with women who were suspected of being gay, Portland gave them an ultimatum: either completely stop the behavior or you’re off the team. Rather than being pressured, many of the Lady Lions’ best players simply quit in fear rather than being bullied out. Crazy thing is that Portland didn’t stop there, taking away players’ scholarships and making it virtually impossible for the young women to transfer to play at another school. Did this happen in the 1950s or 60s? No. Portland just resigned in 2007 after 23 years as the Lady Lions’ head coach.

Training Rules (5/8) profiles many players who were forced off the team by Portland, and most of their careers were ruined by Portland’s vindictive actions. In 2005, one player named Jen Harris actually stood up against Portland (a VERY brave move, considering the coach’s status in the Big Ten) filing a federal lawsuit for violation of the university’s nondiscrimination policy. This is indeed a great story, and is the focus of Training Rules, but the problem is that Harris agreed to a settlement and now has a gag order. Plus Rene Portland refused to be interviewed. So you have the story’s two main characters unable to speak for themselves. Despite the great interviews from many other folks, this fact feels like a black hole in the film. I give the filmmakers the best of luck that they can one day fully complete this story from both sides. Otherwise it feels like a glass half-full. 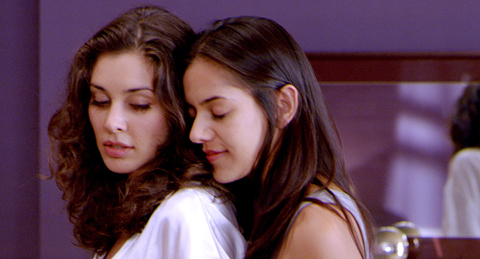 I lightened up the rest of the evening with the romantic comedy I Can’t Think Straight (6/8) which is probably my vote for most eyeball-rolling title of the fest. However the movie was quite cute, reminding me in tone of Nina’s Heavenly Delights from a couple fests back. Tala (Lisa Ray) is having her fourth engagement party in her native Jordan, and her parents are pressuring her to settle down in a traditional marriage despite her Western education and her fierce independence. While back home in London, she meets the girlfriend of her pal Ali, a clumsy but cute writer named Leyla (Sheetal Sheth). The women hit it off, but after they tumble into bed, Tala retreats due to pressure of her culture and her parents expectations. In the meantime, Leyla, despite her own traditional Indian parents, bursts forth from convention and comes out. Will Tala dump the fiancé and run back to Leyla? Is this a romantic comedy, or what? The screenplay is light and funny, and yes, a bit cliched. But the actresses have great chemistry, and, simply put, Lisa Ray is smokin’ HOT and a pleasure to watch. I Can’t Think Straight is a charming movie with a nice multi-cultural bent, and I found that I enjoyed it quite a bit.