There is a scene where Jessica Alba is gyrating atop a stage in a divey bar, wearing a skimpy porn-cowgirl outfit, and twirling a lasso seductively around her head while her hair blows back from an unknown indoor wind-source. I leaned over to my friend and whispered, “You know, I practice that routine at home…”
By Lindaon August 24, 2014
0 Comments
Our Rating 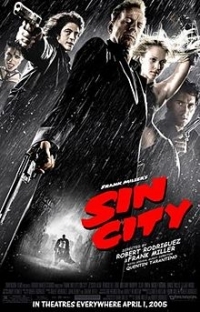 Out of all of the women characters in Sin City, I perhaps related to Jessica Alba’s Nancy Callahan the most. Maybe it is because I’m not an assassin hooker. Or a psychiatrist who answers the door wearing only a thong. Or a whore with a heart of gold who gets murdered. No. Nancy Callahan is your typical ex-child-abductee who is now a law-student-slash-exotic-dancer who still has a penchant for getting kidnapped and likes making out with Bruce Willis.

I imagine you reading the description above and thinking, “Wow. SHE’S the one Linda relates to the most?” Well, let’s review again at the other options for female characters. See my dilemma? I will now stick my fingers in my ears as the fanboys revolt: “But the women are STRONG and SEXY characters! They kick butt! The fact that they are all whores just means they are SURVIVORS and don’t take any SHIT from the MAN!”

Sin City is based on Frank Miller’s dark, ultra-violent series of graphic novels of the same name. Miller is probably most famous for his revival of Batman comics in the take-Batman-seriously bleak retellings of a couple decades past. Now he will be famous for a co-directing credit that caused Robert Rodriguez to turn in his Director’s Guild of America membership in order to get his right-hand man’s name on the marquee. And speaking of which, has anyone ever heard of a “Special Guest Director” in a freakin’ MOVIE before? Quentin, this is not a TV series, but I’ll admit your scene was one of the best in the film (which involves Clive Owen and Benicio Del Toro in a car).

Quentin’s stamp is on this film in more ways than one, as the structure—three main stories are told, which then overlap slightly by the end—has a Pulp Fiction vibe. There is the smart-ass one-liners and bad-guys that steal the show. But the similarities end there. Even if you are not a fan of the dark comic-book genre, and wince at the ultra-violence, there is no way you will not be impressed by the look of this film. In stark-contrast black and white, with images framed as though they’ve jumped off the page of a paneled story, the filmmakers have made a stunning-looking movie. To take it a step further, scenes are teased with splashes of color: the red-bloody slashes on a man’s face, the blue of a retro car, the yellow skin of a particularly nasty-looking bad guy named Yellow Bastard (you will NOT recognize Nick Stahl under that grotesque makeup). This effect could be pretentious, like “Look-ee here!”, but it works surprisingly well, grabbing and directing your eye—a trick used famously by Steven Spielberg in Schindler’s List with the little girl in the red coat.

I’m not going to bother describing the various plots, as they are really secondary to the style. Let’s just say that each involves a thug with a heart (Mickey Rourke, Clive Owen, and Bruce Willis), out to protect the women that they live for (Jaime King, Rosario Dawson, and Jessica Alba, respectively). Throw in a bunch of other bad guys (like Michael Madsen, with weird poofy hair; Elijah Wood, resoundingly creepy despite his Charlie-Brown-innocent look; and Benicio Del Toro, who gets the best scenery-chewing of them all) and bad girls (sword-wielding whore Devon Aoki; innocent whore Alexis Bledel; naked-thong-wearing psychiatrist “dyke”—the only thing keeping her from being a whore, I suppose—Carla Gugino; and waitress-crackwhore-whore Brittany Murphy) and give them all weapons… and that is all you need to know, really.

Fanboys will LOVE this movie, I can tell you that. There are tough guys with almost superhero resiliency, super-sexy chicks with lots of artillery, a cool retro film-noir style, stylish leather and straps, and lots and LOTS of violence. And I’m talking bone-crunching, face-splattering violence. I’m talking chopped off limbs. I’m talking whipping and slashing and slicing. I’m talking swords, machine guns, arrows, mallets, knives, pistols, and pretty much anything that you can think of to crush someone’s skull. I’d say that Sin City softens the violence a little by having the blood appear colors other than red, like negative-space white, or black, or yellow, or, yes, red, which makes it seem slightly less shocking. But the foley guys, with their bone-and-gristle sound effects, still manage to make you wince, even if what you see is not entirely looking right. “Yeeeeesh…” as more than one character says with a disgusted look.

For the rest of us non-fanboys, if you can stomach the violence, Sin City is worth checking out. As it IS based on a picture book (OK, now calm down, fanboys!), the dialogue is sparse and rat-tat-tat rhythmic. And it is often pretty funny, with the best and funniest lines going to, of all people, Mickey Rourke! When have I ever said that? And don’t expect any character development of any depth (one of the complaints from my friend), as it is, well, derived from what is, for all practical purposes, a comic book.

Fanboys will probably give Sin City a full pie. People unimpressed with the violence and the gore and the literal (and figurative) black-and-white characters would probably only give it half a pie. So I’ll meet them all halfway and at least give it a recommendation so you can form your own opinion.