Count me among those who loved loved LOVED the 1999 German film Run Lola Run (no commas… she’s too rushed!). It seems a little odd to make an homage to film that was neither recent enough, or actually even old enough to be considered a classic. But there you go: And Then Came Lola (5/8) is a cute lesbian take where Lola (Ashleigh Sumner), a photographer, has to rush across town (in this case San Francisco, of course) to deliver some photo prints to her girlfriend Casey (Jill Bennett) in time. In time before she gets shot by cops or thugs? No, not quite as serious as the original film… but Casey has a big account on the line, and is in a business meeting for that account. In a bar. With glasses of wine. And the client is a really hot woman (Cathy DeBuono) who has designs on Casey if Lola doesn’t g-d hurry up and get there. 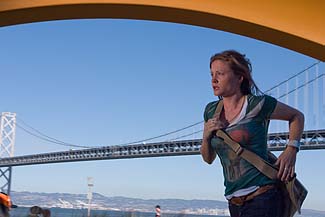 The homage part of the film is right on, as Lola encounters all sorts of obstacles on her race against time (a sexy meter maid, a rabid dog, a swinging couple in a cab, etc.), and like the other Lola, she gets three tries to get it right. Luckily, Ashleigh Sumner is the best thing about And Then Came Lola. She is funny, cute, and harried, and more than a little bit reminded me of a friend of mine. But alas, whenever Bennett and DeBuono are on screen, waiting in the bar and flirting, the film screeches to a halt. Sure they are ridiculously attractive, but the dialogue and acting is completely wooden, making you tap your watch in film that is actually quite short. Run, Lola! Get back on screen and go running back to the meter maid! 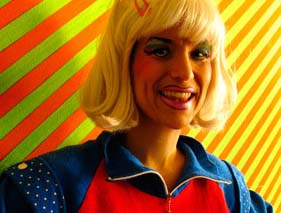 The documentary Travel Queeries (4/8) is one of those films that has some really interesting bits, surrounded by some hot air that you would normally fast-forward through. A collage of interviews of “queers” throughout Europe, I found the doc worked best when, well, the folks had something to say. Those from more liberated places like Amsterdam, Copenhagen, and the UK spent their time doing performance are naked with tape over their breasts, while their supposed brethren were having their first gay pride march in Belgrade, where a handful of marchers showed up and 1,500 thugs were there to greet them. Or the bearded guy in Rome who hates that the Vatican in his backyard wields so much influence over his otherwise live-and-let-live country. Even the British trans guy who spoke of the dichotomy of walking in a parade with out gay cops (who normally hassle guys like him) was more fascinating than interviews with 20-something kids talking about their performance art. But that might just be me, all old and jaded. When someone else had to fight the man in order for you to sing about fighting the man, well, you should let the others do the talking.