Now, I know a few people that wouldn’t have been caught within a mile radius of a screening of a documentary about ventriloquism. But, heck, I was curious. I had a friend once (we’ll call him J) who picked up the most random hobbies, and at one point decided he was going to carve a ventriloquist’s dummy from wood. You know, the old-school type with the rolling eyeballs, dropping jaw, and turning head. J would wax poetic at work about “Tony” (which we quickly found out was the name of the dummy), the progress he was making, the difficulties he was encountering. One day, J was thrilled to report that he had found a pair of barely used little boy’s shoes for Tony at Goodwill, as well as little overalls. We met Tony at a house party that J had, and he actually looked pretty impressive, just as a ventriloquist’s dummy looks in all the photos (or in your worst nightmares), except J was having trouble with Tony’s jaw dropping open (insert the screaming sound inside your head here), and found that Tony was very very heavy, being carved from wood. As J tended to pick up and drop hobbies, I think Tony ended up in a suitcase under his bed. If you hear rustling, DON’T LOOK UNDER THE BED. 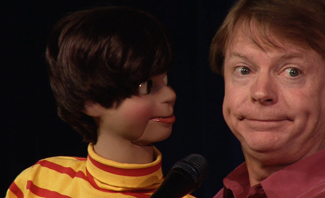 Anyways, because of this, I had to check out the documentary I’m No Dummy (5/8) a cute portrayal of some modern ventriloquists (and their dummy pals), with a little bit of history of the art thrown in. Several current “vents” are profiled along with their dummy pals, and I was surprised to find that most of the modern ones don’t use the classic wood dolls with the rolling eyes, but instead perform with anything from Muppet-like dummies to talking skeleton heads. The first chunk of the film is a bit slow, as it is filled with “talking head” interviews (no pun intended), but when the film delves into some of the history, showcasing footage of vents from the 1930s through the 1950s, like Edgar Bergen, Paul Winchell and Jimmy Nelson, it gets much more interesting. I would have liked more of this historical context from the origins in vaudeville, as well as more behind-the-scenes stuff. But I guess that would be like a magician revealing the tricks behind the curtain. The film was followed by a Q&A with director Bryan W. Simon, as well as engaging performers Jay Johnson (with Bob), Lynn Trefzger (with Chloe), and Tom Ladshaw (with a monkey… arrgh, forgot his name… Cornelius?). This was easily one of the funniest, strangest Q&A’s ever to hit SIFF, and I can say that Bob is one obnoxious dummy. I was afraid to sneak out early, as to not be heckled by the dummies (“Do you have to pee?” asked Chloe, aged three, of someone fleeing the theater). Very entertaining. (Check out the website for the Vent Museum for more about this curious and fascinating art.) 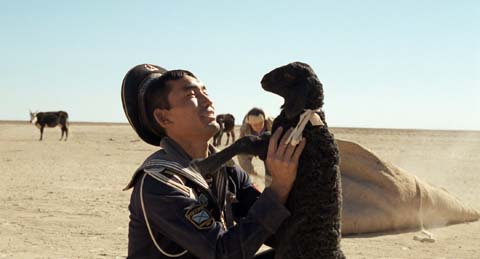 Because I stayed for the dummy Q&A (how could I not?), I cut it too close to make it from Pacific Place to the Harvard Exit for my next film (plus the buses have been really erratic this holiday weekend and tend to just not show up), so I opted to go back to Pacific Place and caught the next film Tulpan (6/8) from Kazakhstan.

This charming flick takes place in the dusty, flat, windswept landscape of the Kazakh steppes. Asa has just returned from a stint in the Navy, and now wants to find a wife. In the meantime, he lives with his sister’s family in their yurt, and his sheepherder brother-in-law begrudgingly takes him to the next family over to hopefully marry Asa off to their daughter Tulpan. Except Tulpan wants nothing to do with this goofy young man with the big ears, a guy who tells seemingly endless tales of how to survive an octopus attack (“you have to bite them between the eyes!”). Asa is not the most talented sheepherder, but he is cute and earnest, with a dream to own his own yurt and flock, so that he can get a satellite dish to receive hundreds of TV channels. Tulpan has a gentle humor, and it a peek at a life so different from our own. There is a lot of stunning photography of dust funnel clouds missing the yurt by just a few yards, and of black thunderstorms over the pancake-flat dusty horizon. It is a fantastic looking film, and the animals (camels, sheep, donkeys, etc.) are just as expressive as the humans, offering surprise hilarity in the form of their bleats and grumbles. Tulpan was a delightful surprise.