Musical theater lovers can rejoice in two-hours of pure Stephen Sondheim bliss as Broadway’s biggest names gathered to honor the master composer and lyricist on his 80th birthday in SONDHEIM! The Birthday Concert. 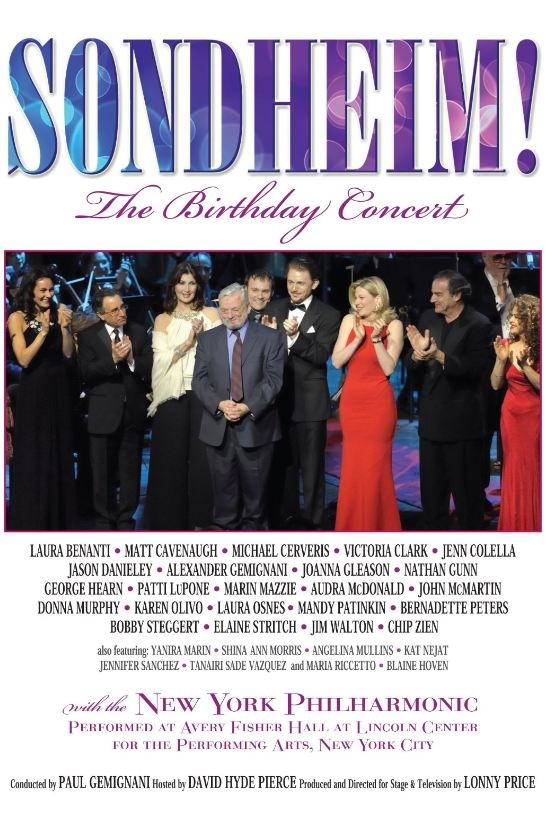 The musical celebration kicks off with a high-spirited performance of “America” from West Side Story performed by Kim Olivo (Anita) and members of the recent revival cast.

Sunday in the Park with George fans will be moved by the touching reunion of original stars Mandy Patinkin (George) and Bernadette Peters (Dot) as they perform the memorable songs “Finishing the Hat” and “Move On.”  You wouldn’t know that the show opened in 1984, their onstage chemistry is still vibrant today.  The same goes for fans of the storybook musical Into the Woods (also on DVD) when original cast members Chip Zien (Baker) and Joanna Gleason (Baker’s Wife) perform the heartfelt song “It Takes Two.”  You can see their eyes recall the memories they have of performing together over 20 years ago.

One of Sondheim’s best known works Sweeney Todd was honored with three songs, including a duet of “Pretty Women” performed by dueling Sweeney’s George Hearn (from the original production) and Michael Cerveris (from the most recent revival).  Michael had George in the barber chair for an infamous shave.  Afterwards Patti Lupone (Mrs. Lovett in the most recent revival) joined them for a performance of the witty and fun pie making song “A Little Priest.”

My favorite performance of the evening was when Broadway’s leading ladies (Lupone, Peters, Marin Mazzie, Audra McDonald, Donna Murphy, and stage legend Elaine Stritch) joined each other for a round-robin tribute of Sondheim’s best known ballads including “The Ladies Who Lunch” from Company (a powerful rendition by Lupone), “Could I Leave You,” “I’m Still Here,” and “Losing My Mind” from Follies, “The Glamorous Life” from A Little Night Music, and “Not a Day Goes By” from Merrily We Roll Along (sung with tender fragility by Peters- she owns this song!).

The concert also featured songs from other productions, including Do I Hear a Waltz, Hot Spot, Saturday Night, and the theme from the film Reds (danced Pas de Deux).

The concert ends with 287 Broadway and Off-Broadway singers taking to the theater aisles and balconies to sing the beautiful and haunting “Sunday” from Sunday in the Park with George.  The emotional power of that moment completely overwhelmed me.  It transported me to a truly happy and peaceful place.  Following the song a gracious and humbled Sondheim took to the stage to share his thanks for the evening.  Some of us may not have been lucky enough to attend this magical concert, but we can celebrate and be grateful for the genius that Stephen Sondheim has brought to the  theater in this very special performance.