There’s something extremely appealing about The Four-Faced Liar. It is one of those fresh indie comedy/dramas that surprises by taking a somewhat predictable plot and making it realistically (and refreshingly) messy. 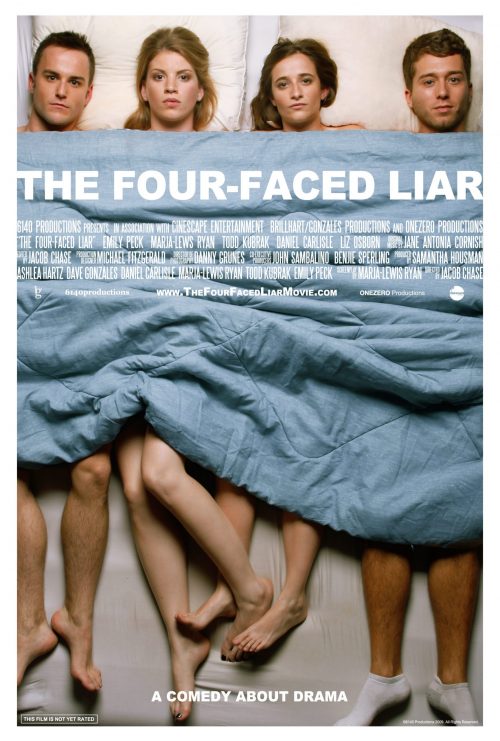 We’ve all seen this before: Young twenty-somethings seem to know everything until life and unexpected love (or lust?) throws them for a loop. In this case, we have squeaky-clean couple Molly (Emily Peck) and Greg (Daniel Carlisle) moving into New York City post college. They are are wide-eyed and more than a bit suburban, but Molly takes the edgy, dirty, noisy city as a challenge, while Greg is not so sure.

They go to the local pub The Four-Faced Liar and meet a couple of interesting locals their own age. Bridget (Marja Lewis Ryan) is a womanizing lesbian, a total player, while her best friend and roommate Trip (Todd Kubrak) is funny and hip, and has his own awesome girlfriend that he doesn’t exactly treat like gold. The foursome click right away, with Trip and Greg hitting it off in a total straight-boy, back-slapping way (though Trip is a lot more open-minded than straight-laced Greg). The two girls hesitantly circle each other, though Molly’s blatant curiosity about Bridget keeps her coming back.

As Molly morphs into a New Yorker, Greg backpedals, wanting things to stay the same. But with straight Molly falling for not-so-straight Bridget, everyone notices that things are quickly changing… and things will never go back to being the same, for better or worse.

“I was OK with my life being just OK,” says Molly when she sees that her actions have thrown her life for a loop, as well as affected her friends around her. In a nice touch, it is well established that Bridget is a womanizer who can’t commit, so even though the lure of passion is there, as a viewer you can’t help but think Molly may not be doing the right thing falling for her. Luckily, Molly seems pseudo-aware of this problem as well, and because of this, there are no tidy endings for The Four-Faced Liar.

I was surprised how much I enjoyed this film right from the start. The unknown actors are all spot-on. A friend of mine insisted that Bridget would not have been the inarguable lesbian-magnet that she portrays, but Marja Lewis Ryan, who played her and is also the screenwriter, totally reminded me of a friend of mine that pulls off that same sort of cocky confidence that can’t help but make you smirk. Emily Peck is very likeable in the pivotal role of Molly, and though the role of Greg calls for a dull straight-man, Daniel Carlisle still makes him sympathetic.

Finally, Todd Kubrak as Trip creates a cad that you kind of can’t help but love despite his faults. Throw them all together, with a brisk script and able direction, you have a highly enjoyable film that shows the good and bad sides of following your lust.