No four words take us back to our childhood faster than “Once upon a time!” Hearing them, you knew a fairy tale was about to unfold. Those same words jump start the highly-anticipated and highly-promoted (although not as a musical) film Into the Woods. However this isn’t a fairy tale for little kids.
By John "Broadway" Baileyon December 23, 2014
1 Comment
Our Rating 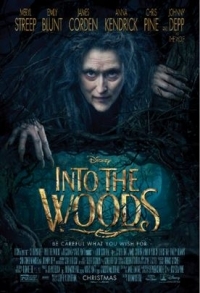 Based on the 1987 Tony-nominated Broadway musical of the same name, Into the Woods shows what could happen if you threw a bunch of fairy tale characters together in the same story and watched as their worlds collided and intertwined.

The film focuses on a Baker (James Corden) and his wife (Emily Blunt) as they set out to collect magical items (red cape, white cow, gold shoe and hair the color of corn) to have a curse placed on their family tree reversed by the local witch (the always incredible Meryl Streep). Along the way their paths cross with a precocious Little Red Riding Hood (Lilla Crawford) in route to her sick granny, Cinderella (Anna Kendrick) fleeing the attraction of the prince (a scene-stealing Chris Pine–who knew he could sing!), Rapunzel (Mackenzie Mauzy) locked in a tall tower, and Jack (Daniel Huttlestone), of beanstalk fame. The all-star cast also includes Tracy Ullman (as Jack’s Mom), Christine Baranski (as Cinderella’s Stepmother), and a miscast Johnny Depp (as The Wolf who preys on LRRH).

I was worried heading in to watch the film as I’ve long been a fan of the musical. Would it hold a candle to the original cast recording that I listened to on repeat in high school or the DVD of the televised airing? Would it work as a film? I also worried that audiences wouldn’t get Stephen Sondheim’s songs, especially since the majority of the show’s dialogue is sung. Boy was I happy once the end credits rolled and I could say that Rob Marshall’s film really nailed it. Marshall and his team assembled a talented cast (actors that can actually sing–Anna and Meryl brought new life to their songs) and created a magical world of rich colors, textures, and shadows.

Of course there were a few things I liked better in the stage version (for instance ‘No More’ a song sung by the Baker and the Mysterious Man was cut), but the story is so wonderfully told through the medium of film that you hesitate making comparisons with the original. Sondheim fans will enjoy hearing such favorites including ‘No One is Alone,’ ‘Children Will Listen’ and ‘On the Steps of the Palace.’ And new audiences will fall in love with his genius, witty and heartfelt lyrics.

Into the Woods takes its audience on a familiar journey and then changes course half way through. It explores the consequences of having a wish granted and shows what happens after ‘happily ever after.’ This is a film that I’d like to see again on the big screen and one I’m sure I’ll own on DVD one day.