What does it mean when a person really enjoys a movie that has a whopping 6% approval rating on Rotten Tomatoes? Is that embarrassing? Funny? Or just the meeting of a movie and its intended audience? Accidental Love has 6% right now. I really liked it. 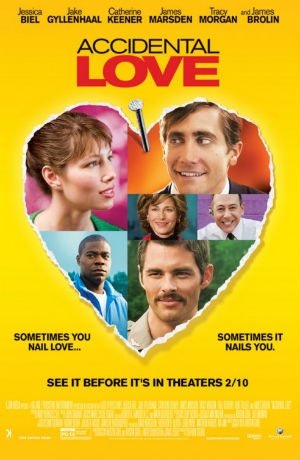 Okay, so I’m a little worried about what that says about me, but to be fair, Accidental Love had a rough start in life. Originally produced in 2008, the movie was fraught with financial difficulties, abandoned by its director (David O. Russell), and finally released in 2015 to a less than warm reception. Similar in tone to dark, satirical comedies like Drop Dead Gorgeous and Pumpkin, Accidental Love manages to be relevant and ridiculous at the same time.

When we meet Alice (Jessica Biel), she’s just a typical small town girl working as a roller-skating waitress at a drive-up burger joint. She’s not particularly ambitious, but looks forward to marrying her cute boyfriend, Scott (James Marsden), and enjoying a happy, ordinary life. Those dreams are shattered when Alice is accidentally shot with a nail gun. A nail lodges in her head and Alice is rushed to the emergency room, but without health insurance, she faces a harsh reality. Surgery to remove the nail will cost $150,000.

Lacking the resources to pay for surgery, Alice is left a drooling shell of her former self. The nail causes erratic behavior, dizzy spells, loss of coordination, tirades in foreign tongues, and a variety of other maladies that lend themselves to comedy. She promptly loses her job and it’s clear that she’s close to losing Scott as well. If she’s to have any chance at a normal life, Alice is going to have to fight the system.

Joined by Reverend Norm (Kurt Fuller) and her friend Keyshawn (Tracy Morgan), who suffer untreated and unmentionable conditions themselves, Alice heads to Washington to make herself heard. There she falls in love with Howard Birdwell (Jake Gyllenhaal), an idealistic young senator who stands behind her. Though much of what follows is silly and overblown, so is what goes on in government on a daily basis. Alice encounters battling egos and endless red tape, but continues championing her cause until she gets the results she wants…or at least some results.

A great deal of the film’s appeal is owed to its charming stars and delightful supporting cast. Biel and Gyllenhaal are both endearing in rare comedic turns, while Beverly D’Angelo, Kirstie Alley, Catherine Keener, James Brolin, and Paul Reubens are all masters at delivering material that is at once dry and over the top. In short, the movie is funny, even though the fact that a random accident can ruin a person without health insurance is not.