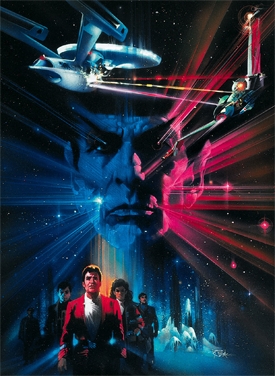 It is hard to discuss Star Trek III: The Search for Spock without spoiling Star Trek II: The Wrath of Khan… so consider yourself warned and stop reading now. There. Now. Star Trek II ended with the death of Spock (Leonard Nimoy) as he sacrificed himself to save the Enterprise, making Trekkies across the land weep into their popcorn. His body was jettisoned in a pod to rest in peace on the newly born planet that was a result of Project Genesis (an explosion that could turn a desolate space rock into a life-sustaining Class M planet in a matter of hours).

Kirk (William Shatner) is still in mourning over the loss of his best friend. He lounges in his San Francisco penthouse wearing the latest silly futuristic leisurewear fashions (wait until you see Chekov’s salmon-pink jumpsuit and Sulu’s leather cape!). Spock’s dad Sarek (Mark Lenard) stops by to pay his respect and basically busts Kirk for leaving Spock’s body behind on a planet on the other side of the universe, when instead, Spock should have been brought home to Vulcan. Not only that, but all of Spock’s memories must have been transferred to someone before he died (kind of as a backup disc, I suppose), which may explain why McCoy (DeForest Kelly) has been a little loopy and Spock-ish lately.

Oh, yeah, and then there’s the side-plot of Kirk’s adult son David (Merritt Butrick) who was also in Star Trek II, but was so dull in that movie as well that I forgot to mention him. He is buddying up on Genesis with Lt. Saavik (played by Kirstie Alley in Khan, now played by the bland Robin Curtis), and they discover that the planet growing too fast and dangerous for its own britches, but it has also rebirthed a baby Spock from his tomb. So not only is Spock (quickly growing into a wailing Vulcan teenager) on the planet, but David and Saavik manage to get themselves captured by the forgettable bad-key Klingon (Christopher Lloyd), supposedly upping the stakes for Kirk on this rescue mission.

Where The Search for Spock works best is in the exploration of the lifelong friendship between Kirk and Spock. But unfortunately the rest of the story is pretty dull and slow moving. There is not much action and adventure, and the emotional stakes of Kirk’s son being in the middle of all the strife is surprisingly unmoving. By the time the film wraps up, you are left checking your watch. “Move along, crew! Now let’s get back to going where no man has gone before!”

Star Trek III: The Search for Spock is included in the Star Trek Motion Picture Trilogy DVD set (which includes movies II, III, and IV), and has been remastered in high definition. Extras include feature commentary by Ronald D. Moore (hero producer of Star Trek: The Next Generation and Battlestar Galactica, among others) and Michael Taylor (Deep Space Nine and Voyager writer), who both freely admit they had absolutely nothing to do with Star Trek III. Among the other extras are a behind-the-scenes peek at the Star Trek props that are now housed at Seattle’s own Science Fiction Museum and Hall of Fame (nice commercial!); the silly deadpan “Starfleet Academy SCISEC Brief 003: Mystery Behind the Vulcan Katra Transfer”; “Industrial Light & Magic: The Visual Effects of Star Trek”; and the fascinating (in a “watching a train wreck” way) “Spock: The Early Years”, which is an overly extensive interview with the actor who played the teen Spock in the movie. He waxes poetic (and often) about how he got to have Vulcan finger sex with Robin Curtis (note that he doesn’t refer to her by her character name of Saavik) and how that moment in the film gets the women at Star Trek conventions all hot and trembly. Oh, and he name drops people like Michael Bay and Tarsem Singh (“all friends of mine”), because, see, he went to school with them, and they are all like really famous now. Whoo-boy.