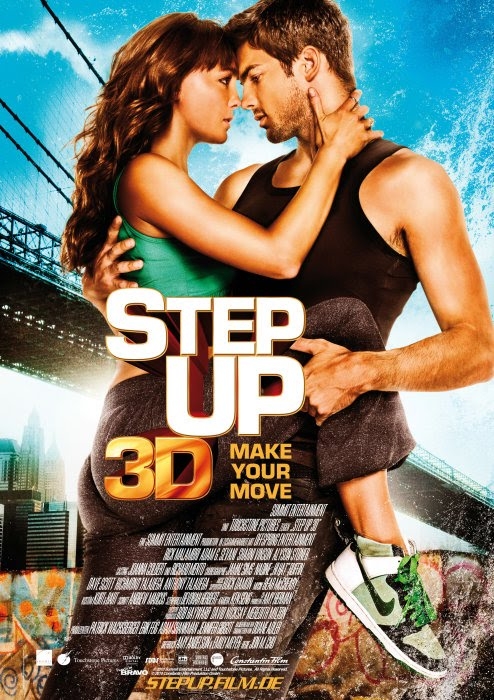 It’s kind of funny that there is a formula to dance movies. Doesn’t anyone out there just, you know, dance for fun? To have a good time? Instead, dancing represents your deepest soul, and that ramshackle group of multi-ethnic streets kids in the deepest urban trenches are your true family, especially if you are a rich white kid who is still troubled by some dark family trauma (usually a dead parent or sibling or two).

So in Step Up 3(D), the only remaining major cast member from Step Up 2 is that adorable gawky, floppy-haired kid named Moose (Adam G. Sevani), who is frankly adorable (even though the longer you stare at his face, you realize he is kind of gender-neutral, like a little girl with curly locks).

So Moose and his BFF Camille (Alyson Stoner) are off to college in big New York City, and the first thing he does is end up in the middle of a dance-off in the middle of a park. Balloons go flying, pigeons go squawking, and tchotchke stands get knocked over in the ferocity of the competition, so of course the cops come to break it up (what is this? Footloose?) and Moose jumps into a stranger’s car, because that’s what you do in gritty New York City.

Because of his mad skillz, Moose ends up pulled into the folds of Luke (Rick Malambri, a doppleganger of Ashton Kutcher) who is crushing on a new girl in the scene Natalie (Sharni Vinson). Since it is required to see a couple kiss in a movie like this, attention ends up (dully) turning to Luke and Natalie’s weird non-romance that is based completely on the fact that they are both pretty and can both dance. Every time the story stops to listen to them earnestly saying inspiration words to each other, the energy gets completely sucked out of the movie. Which is, unfortunately, a lot.

Step Up 3 doesn’t quite have the momentum of the equally fluffy and formulaic Step Up 2 (OK! So I didn’t see the first one!), but man, the dance sequences are still pretty awesome. As in the previous film, it has been duly noted that dance scenes are always hotter when everyone is wet (whoops! dance floor got flooded during a competition!), and this time around other clever tricks like light-up suits are introduced. I particularly liked this one guy, Madd Chadd, who danced like a freaky, herky-jerky robot, and a guy named Cloud in the park dance-off, who is totally gravity-defying in his moves. The dancers are easily the main (and only?) reasons to watch these films, and for me, that is reason enough.

Unless you have the fancy set-up, the “D” of what was Step Up 3D in the theaters will be gone. But that’s OK, because you can spot exactly what scenes were exploited for the 3D nonsense, and it really doesn’t need it. That said, the extras on the discs include some extended and rehearsal dance sequences, some featurettes, a bunch of music videos, and the so-called “real” movie that Luke made to get into film school. Of course, the only ones you need to watch are the ones with dancing.