Try to imagine Hello Kitty as a Powerpuff Girl. Then give her a dirty mouth and a violent streak. Now imagine she’s autistic. 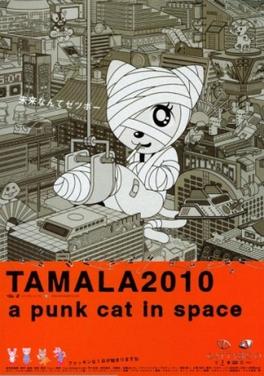 Well. What was I expecting, really?

Before the screening began, a guy from Cinema Seattle came out and hollered, “Are you ready for Tamala?” and we were all like, “Yeah!” and apparently we weren’t loud enough, because he informed us that, we were not, in fact, ready for Tamala. What do you know? He was right.

Try to imagine Hello Kitty as a Powerpuff Girl. Then give her a dirty mouth and a violent streak. Now imagine she’s autistic. And she’s in superflat black and white animation. Now imagine you’re on acid while witnessing this. That, ladies and gentlemen, is Tamala.

The first time we see Tamala, she wakes up in bed, stretching and yawning in an almost revolting display of cuteness. There is an ax in her bed and a skull on the floor, neither of which are ever explained. Tamala, whose eyes and feet have their own sound effects, bops out of bed and shortly thereafter a chandelier inexplicably falls from the ceiling and destroys her bed.

God, I don’t know what else I can say. Would you like a plot summary? It won’t help, but here goes. Tamala is a one-year-old kitten in some sort of Feline Galaxy whose mother is a naked woman wrapped in an anaconda. She goes to Planet Q and meets a male cat named Michelangelo, whom she comes on to by saying, “I’m very tasty. Would you like to eat me?”

Tamala and Michelangelo have many fucked-up adventures that are incoherent to a degree that would make Paula Abdul say, “Wait a second, that doesn’t make sense!” For example, the two of them are shopping when Tamala has to pee, and Michelangelo tells her the toilets are downstairs. So Tamala takes an escalator down to what appears to be the Mines of Moria and engages in a Three-Stooges-hall-of-doorways-style gag. Then she comes across a Renaissance-style painting of cats being disemboweled. She looks at it for, like, ever. NONE OF THIS IS EVER ACKNOWLEDGED AGAIN. Already, I can see I will never be able to do justice to the acid-trip that is this movie.

Anyway, the point is… um… something about an evil corporation called Catty & Co. And Tamala being Jesus. Yes, it is actually intimated in this film that Tamala is Jesus. Or something pretty close it. Whatever.

However, I have to say, I laughed during this film. A lot. Tamala’s penchant for profanity is made endlessly amusing due to her utter lack of any inflection besides the standard Powerpuff-style squeak. Such as when her mother orders her not to leave the galaxy, and Tamala responds, “Fuck off, anaconda bitch.”

The bizarre and almost avant-garde randomness worked for me until Tamala was eaten by a dog about an hour in. It was all downhill for me from there. After that, the funny started being taken over by the weird and I wasn’t having such a good time anymore. Maybe I should have done some drugs beforehand, like the guide suggested.

Actually, I take back what I said before. Perhaps Paula Abdul is our only hope for deciphering this film. Perhaps she would watch it and say, “Finally, a movie that makes sense. What is it you people don’t understand?” Will someone get her on the line?