Even the accountant can’t organize all of these random puzzle pieces into a coherent whole…
By Lindaon May 4, 2017
0 Comments
Our Rating 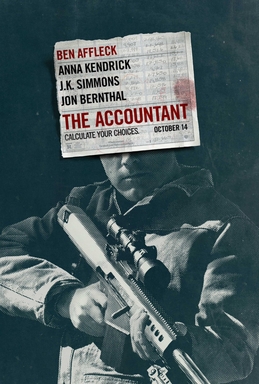 Ben Affleck is a kind of quirky, deadpan man named Christian Wolff who wears very nice suits. He doesn’t pick up small talk cues, or really look anyone in directly in the eyes. He’s an accountant. Right there, you wouldn’t necessarily assume that he is different than other accountants you may know (sorry!). But this man is not only obsessively precise, driving as crisply as he dresses, and arranging his food perfectly on a plate before eating, but he is an ASSASSIN!

Oh, I jumped ahead a scene or movie or two. We learn he is functioning autistic. This is explained mostly in flashback, when he was a bespectacled kid who put together puzzles to calm himself down. The assassin part is explained because he had a military dad who made him and his brother train in martial arts like the Karate Kid until they were bloody and bruised.

Anyway, in an interesting jumble of scenes, he is hired by a robotics firm led by mastermind John Lithgow. The young company accountant, tiny Anna Kendrick, discovered what she thinks is a hiccup in the numbers, and Wolff has been hired to go through the books to find where or how the numbers have been cooked. One Beautiful Mind montage later, after Christian has drawn numbers all over the walls with pen, he finds the mistake. Ooops. The company guys are not pleased, so attempts on the life the accountant and tiny Anna Kendrick are made and… The accountant is an assassin! That’s right! And his accuracy with a gun is like Rain Man’s accuracy counting toothpicks! Who knew?!?!

There are many other characters in The Accountant, and all sorts of side-plots that seem like they were taken from other movies. People like J.K. Simmons and boofy-haired Jon Bernthal are in this and are doing things. There’s a Pollock painting. There is a part of a toilet smashed on a guy’s head. There are foreign terrorists. There is a farmer and his wife and lots of black-glove wearing sinister men with guns. What is going on????

There are a few intriguing scenes. Anna Kendrick makes anything better, so the scenes of her and Ben Affleck are kind of sweet, but are few and far between. In fact, as soon as we start to like her character, she simply disappears for most of the second half of the movie. I guess she fell asleep on the couch.

This is just a silly movie that throws in plot twists simply because they are expected. The supposed biggest twist is saved for the end… but I figured it out around twenty minutes into the film, as did my friend. When the big reveal happened, a woman sitting near me gasped and went, “Whaaaat!” and I thought, “Really??!?!” I suppose that woman was the target audience. At least she might be happy that the ending leaves the movie wide open for a sequel. Let’s hope that doesn’t happen.