Though certainly not a crowd-pleaser, The Event is one of those films to see or rent when you want a good cry. 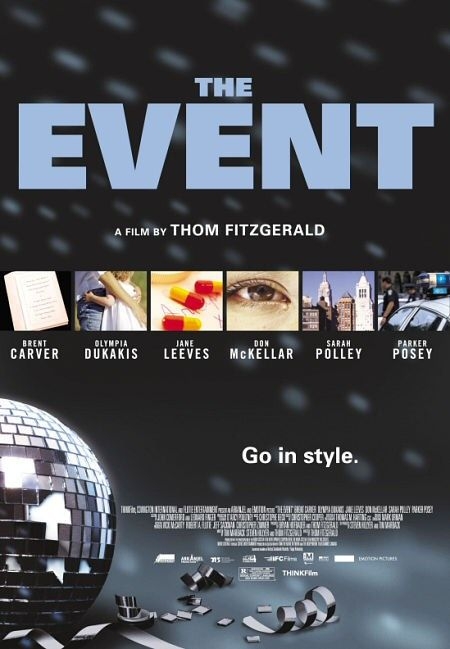 Now, one of the things I love about going to film festivals is seeing movies “cold”… i.e. glancing over the schedule, eyeing the cast of a film, for instance, and circling it, saying to yourself, “Say, Parker Posey is a funny gal… I think I’ll see this one!” But man oh man, I don’t think I’ve ever been so blindsided in recent memory as I was with The Event.

I walked in with no idea of the plot; if anything, my guess was that it was a comedy (because of the presence of Posey). But I left the theater after two hours of sobbing, shielding my eyes against the rays of the matinee, last-day-of-fest sun, thanking my lucky stars that I was later going to see a happy Dutch musical to end my day.

The Event is basically It’s My Party, but with better direction, and a much much better cast. The plot swirls around the investigation of an assisted suicide case, being looked into by a New York City prosecutor named Nick (a surprisingly glum Parker Posey). The film’s focal point in flashbacks is a 30-something man named Matt (Don McKellar) who is dying of AIDS, so decides to go out in style on his own terms. He throws a party, dubbed “The Event” to celebrate his life, and invites his friends and family. Some of the circumstances of his death are fishy, so after-the-fact, his suicide is investigated.

Let me just say: I LOVE Olympia Dukakis! She came in as third runner-up as Best Actress for this role when it played at the Seattle International Film Festival, and I can totally see why. Olympia, as the mother of the dying man, breaks your heart with her strength, love, and commitment to her son. And her performance is surprisingly funny at times as well. (Thank god for the occasional humor in this film… weeping for two hours is exhausting.)

The rest of the cast is strong as well, including the always solid Don McKellar and Sarah Polley (the Ubiquitous Canadian Actors that are in every film from that country). If there was any complaint to be had about The Event is that there were too many supporting characters, which dragged out the investigation part of the plot a bit too long. But that is an extremely minor quibble.

Though certainly not a crowd-pleaser, The Event is one of those films to see or rent when you want a good cry. I was literally weeping at the final shot of the film, it was that relentless. But I didn’t feel used—I felt rejuvenated by the story of friendship and love that was represented on screen.