Doubt is a tough nut to crack for many reasons, the least of which is the fact by the end of the film you have no idea if the priest at the center of the scandal is guilty or innocent.
By Lindaon August 24, 2014
0 Comments
Our Rating 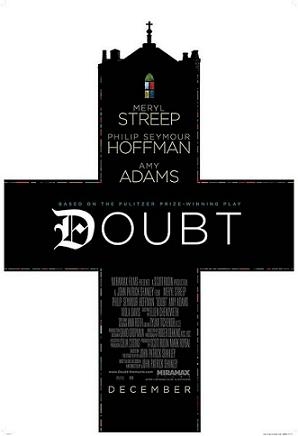 Based on a Tony-winning play, and put to screen with an entirely new cast (a controversial choice, I’ve heard, as the Broadway stars all won raves and awards for their portrayals of the same characters), the movie somehow succeeds in feeling slight and too long.

It is the early 1960s, and Sister Aloysius (Meryl Streep) rules an urban Catholic boys school with an iron fist. Sister Aloysius is Old School, quite literally in this case. Things are changing, both in society and in the Church—the changes of Vatican II (never explicitly mentioned) are shaking things up. Sister James (Amy Adams) is a wide-eyed young nun who greatly respects the elder sisters, but is also receptive to the Church relaxing. And this new Church is represented by Father Flynn (Philip Seymour Hoffman).

Sister Aloysius can’t stand Father Flynn. He is charming, funny, easy-going, and the boys love him. His sermons pack the church, and are thought-provoking and relevant. He is approachable and friendly, two characteristics that Sister Aloysius most certainly is not (and she takes pride in this). He tells her to lighten up and relax. She is furious. Sister James is secretly kind of smitten with him.

But all hell breaks loose when Sister James sees a series of events—or perhaps just implications—that suggest that Father Flynn has taken an unusual intimate interest with one boy, the lone black kid at the school named Donald Miller (Joseph Foster). She whispers her suspicions to Sister Aloysius, who explodes in a way that implies that she was expecting… nay… hoping for such a scandal. This type of behavior will NOT be accepted in her school!

Doubt, which was adapted from a play where there was only four characters on stage (the children were just talked about, but not represented) is a very talky film. There is very little action or scene changes, with conversations only taking place in various rooms in the school or on the church grounds, except for one moment where Sister Aloysius confronts Donald’s mother Mrs. Miller (Viola Davis, the only woman whom I’ve seen lately to steal a scene right from under Meryl Streep’s nose) with her suspicions. There is a lot of yelling. There are a lot of hissed statements. Several times Father Flynn gets so riled up he looks like he is about to burst a blood vessel.

But at the end of the film, I kind of felt like, “That’s it?” Even though Doubt clocks in at a solid hour and forty-five minutes, I felt like something was missing at the end. It is basically about two people arguing about something that neither of them can prove. In the meantime, Viola Davis completely owns what basically amounts to one scene, and Amy Adams seems a bit out of her league (that is when she is around… she actually disappears for a large chunk of the movie). That leaves Meryl Streep and Philip Seymour Hoffman yelling at each other. They are both outstanding actors (Hoffman, in particular, is great), but the accusations spin into a whirlwind, and then… pfffft. Doubt has the kind of plot that should leave the audience arguing with each other about the conclusion, but my friend and I were instead mulling over why we were disappointed in the film.

The DVD of Doubt includes feature commentary with writer/director John Patrick Shanley, who offers insight on adapting his own stage play for the screen. “From Stage to Screen” also covers this territory, discussing the successful and award-winning play (and acclaimed cast) on Broadway, and the changes that were made to bring the story to the big screen. Other featurettes include “Scoring Doubt,” about composer Howard Shore’s original soundtrack score; “The Cast of Doubt,” interviewing the top-notch cast of Meryl Streep, Philip Seymour Hoffman, Amy Adams and Viola Davis, who ALL, yes ALL got Oscar nominations for their roles; and “The Sisters of Charity,” about the Shanley’s (and Streep’s!) research into real nuns’ lives to make sure they were being accurately portrayed in the film.