The Hobbit: The Desolation of Smaug

The bloated epic takes up as much space and time as possible… until we are finally rewarded with the dragon Smaug. 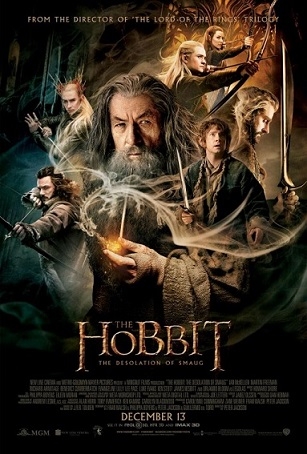 The Hobbit Part 2 picks up with a cantina scene right out of Star Wars. Thorin (Richard Armitage), the Dwarf King, sits down for some grog, fully aware that he is being watched. But before you can say, “Greedo shot first!”, Gandalf swoops in to break the tension and introduce himself. Ah, yes, this is how it all began. This is how Thorin knew to show up at Bilbo’s door, expecting a master thief—much to Bilbo’s surprise.

It’s good that Smaug starts with a flashback, because once the story picks up where the last left off, the Dwarves and Bilbo are… again… walking. Sigh. Here we go.

Assuming that the major scenes in the film were pulled from the book, the continuing story sometimes betrays the original novel’s target audience (kids) with its endless action scenes, like barrels of Dwarves floating down a river (which seem like a model for a new Disney ride) and giant spiders cocooning our heroes. Speaking of spiders, I scratched my head during that whole sequence. Hadn’t I seen giant spiders before? Yes, it was in Lord of the Rings: Return of the King. These films are getting so epically full that they are becoming derivative of themselves.

The introduction of a badass woman-warrior elf Tauriel (Evangeline Lilly), is completely, and frustratingly wasted. It is made immediately clear that she is only there to serve as a love interest in a triangle between a certain Elf that we all know and love (Orlando Bloom’s Legolas), and the Dwarf Kili (Aidan Turner, aka “the cute one”). We also meet the Elf King Thranduil (Lee Pace, chewing scenery), who looks like a missing band member from Empire of the Sun, plus a new token human hottie, Bard (which is his name, not his occupation) of Laketown (Luke Evans, playing the human, not the town), who helps the band of travelers on their way to the dragon Smaug. None of these new characters make a huge impression, but they all sure are pretty.

I was kind of hoping that Desolation of Smaug would be the Empire Strikes Back of the trilogy… or more accurately, The Two Towers (which was my favorite of the Lord of the Rings movies). Once you get past, say, the middle of the movie (starting with the introduction of Laketown, which is a really cool set), it does finally get better than the first film. Relationships between major players (as well as the mission itself) get a little complex once the troupe finally make it to the mountain, wherein the dragon Smaug lay in a lair of treasure. The verbal showdown between the giant dragon Smaug (voiced by Benedict Cumberbatch) and Bilbo (Martin Freeman) stands on par with some of the best of the series. This final third is where the film comes alive, reminding you of how amazing it is that Peter Jackson was able to create this fantastic world on film in the first place.

The Hobbit is bloated, for sure, and really is too much of an attempt at a good thing. You can show Legolas slaying hundreds of orcs while standing on the heads of Dwarves floating in barrels down a river. But, still, nothing, NOTHING is as cool as the shot of Legolas mounting a running horse with one hand in The Two Towers. Sometimes less is more, Peter. Editing is not a bad thing. When this series is over, I’m suspecting that nine hours of The Hobbit would make a really good four-hour movie.

Again, Peter Jackson and company now how to throw fans a LOT of cool extras. As in part one of The Hobbit, Jackson invites you behind the scenes during the film’s production, plus scoring and post-production. There is also a not-quite “Live Event: In the Cutting Room” which featured Jackson fielding “live” fan questions. “New Zealand: Home of Middle-Earth, Part 2” highlights the where and what of filming locations (take notes for your next trip!). There are also a bunch of trailers for Smaug and other films, plus a music video for Ed Sheeran’s “I See Fire”.