The Girl With The Dragon Tattoo (Män som hatar kvinnor)

Despite the fact that most images didn’t match what I had in my head, and the fact that the violence in the film was as unbearable as it was in the book, The Girl with the Dragon Tattoo (movie and book) is worth your while simply because of the character of Lisbeth Salander.
By Lindaon October 27, 2016
0 Comments
Our Rating 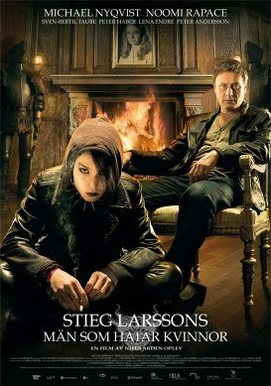 The Girl With the Dragon Tattoo is an intriguing if kind of by-the-book (no pun intended) crime story. The plot itself is gripping, but it is the story-behind-the-story that helped catapult the book into an international sensation. The first book in a trilogy, it was written by author and journalist Stieg Larsson, who died before he saw his books published. He died of a massive heart attack at the age of 50, and some even speculate foul play (which has been dismissed) because of death threats he received as editor of a magazine in his native Sweden.

So one can’t help but see the parallels between Larsson and his character of Mikael Blomqvist (Michael Nyqvist), a journalist/editor that we meet just as he is convicted of libel against the very powerful magnate of a corporation. With a several-month jail term looming, he decides in the meantime to drop off the grid and take up an assignment for a mysterious man named Henrik Vanger, former CEO of the huge Vanger Corporation, who wants the disappearance and maybe murder of his beloved niece solved once and for all. It may be trickier than it sounds as Harriet Vanger disappeared 40 years earlier, and all the suspects are members of the powerful Vanger family itself.

Meanwhile, we are introduced to the girl with the dragon tattoo herself (Noomi Rapace, in a great performance). A sulky, slouchy, and completely edgy figure (beaten-up leather jacket, dyed black hair, facial piercings) is harassed on a train platform. She is small and delicate looking, but knows how to fight back and break a bottle in some asshole punk’s face. She also happens to be an ace hacker, and thusly a shockingly good private detective. That actually sounds kind of corny in print, but there is nothing about Lisbeth Salander where you don’t believe for a second that she could grab all the information from your home computer… and from halfway around the world, if need be. She’s just different, which is why she can get away with so much. No one would quite suspect her.

Bloomqvist and Salander’s paths cross, and he realizes that he could use her investigative skills to solve the case of Harriet, and she realizes that the more she knows about the investigation, the more she simply has to see it through. The middle aged journalist and the punk 20-something make for an odd couple (actually I thought they were even odder in the book), but it works.

Honestly, the violence in the story is very very icky. Maybe others are more used to graphic images and scenes like these, but let it be said there is rape, rape revenge, torture, beating, and other quality images to stick in your head long after the film is over. I closed my eyes more than once. But to see Lisbeth fight back, either intellectually or physically, manages to somehow make it seem better. I stuck with the story to make sure she was OK, because you know what? Her character was one of the most coolest and unique female characters I’ve seen on film in a long time. And it looks like (with two more books in the Millennium trilogy) we’ll be seeing more of her.

Extras on the DVD release include interviews with actress Noomi Rapace and director Niels Arden Oplev, plus the Vanger Family Tree to help map out the tangled web of the movie’s mystery.