I went in with expectation of the American version being a horribly bastardized version of the original, like so many other remakes. But The Ring was quite a nice surprise—I think it could stand on its own.
By Lindaon October 12, 2013
0 Comments
Our Rating 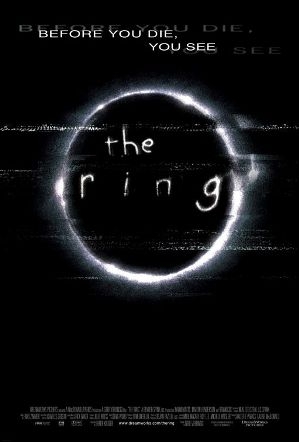 There’s just something creepy about some urban legends and how they sometimes become self-fulfilling prophecies. If you plant a suggestion of something—like inevitable death—into someone’s mind, sooner or later they are going to find a way of making it become reality. You know what I mean, you hear something like “Be careful, that’s sharp, don’t cut yourself…” followed shortly thereafter by, “OUCH! Does anyone have a Band-Aid?”. At first, this is the direction The Ring looked like it may head, but fortunately for everyone, it goes somewhere completely different.

Speaking of somewhere completely different, that’s exactly where I wish the yammering idiots behind me in the theater would have gone. As if they were in their own living room, they proceeded with a running commentary throughout each and every scene. I believe the only time they shut their pie-holes, was when they inhaled. For the love of Pete, people, remember to pack your manners when you leave the house and join the general population. If you forget to bring them to the theater, just put a sticky note on your cell phone, so when you go to TURN THE DAMN THING OFF, you’ll see the note to shut your trap.

The ranting will now stop. Thank you for your indulgence.

Ok, back to The Ring. The basic story of The Ring goes like this: You watch a disturbing mysterious video tape, that somehow materializes from nowhere, and directly afterwards the phone rings. When you answer the phone an extremely creepy voice whispers “Seevveenn daayyss” and then, on the seventh day… Well, you get the picture.

Based on the hugely popular Japanese original, Ring (Ringu), The Ring takes place in Seattle and the outlying area, where Rachel Keller (Naomi Watts) is a reporter for The Seattle P-I. After her niece mysteriously dies, she begins to investigate the cause of death and stumbles onto the fact that her niece and 3 of her friends all died on the same night, under different circumstances. The trail leads her to a cabin that the quartet had rented the weekend before their deaths. While checking in, she finds an unmarked video tape. Not truly believing the story of the video tape, she pops it into the VCR and hits play. After about 2 minutes or so of confusing and somewhat disturbing imagery, the phone rings… Suddenly, the normally steel-nerved Rachel becomes a believer in the legend. Who wouldn’t, really?

The film sets off on a day-by-day account of her quest to get to the bottom of the legend. With the help of a friend Noah (Martin Henderson) they trace the origin of the story by deciphering the images on the videotape (which Noah has now seen and has his own countdown to deal with). Along the way, they discover some pretty strange tales and the audience is exposed to some pretty disturbing scenes.

The filmmakers incorporated parts of both Ringu and its sequel. There are some elements of the second Ringu that played quite well in The Ring, aiding in the development of the story as a whole. Rachel’s son, Aidan (David Dorfman) plays a bigger role in this version. His character rounds out the story and gives it an extra-creepy aspect. Having seen the original version, it was interesting to see that The Ring was told, in some cases, shot-by-shot and scene-by-scene as the original. I guess if you start with an effective formula, why change it, right?

Overall, The Ring was a lot better than I had expected. I went in with expectation of the American version being a horribly bastardized version of the original, like so many other remakes. But The Ring was quite a nice surprise—I think it could stand on its own. If you have an extra money just burnin’ a hole in your pocket, check it out, but remember that the Japanese version is out there, too. Don’t be afraid of the subtitles!