Noomi Rapace’s Lisbeth Salander is easily the coolest, strangest, and most interesting character to hit the screens in awhile. So, because The Girl Who Played with Fire is all Lisbeth, all the time, the movie totally worked for me.
By Lindaon October 27, 2016
0 Comments
Our Rating 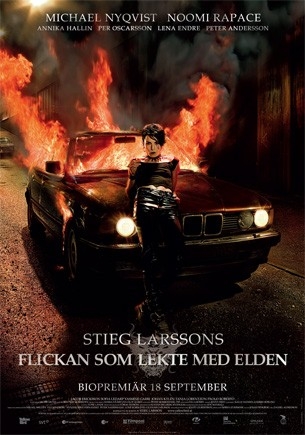 It is hard to say if The Girl Who Played with Fire stands alone narratively from the über-popular book and movie of Stieg Larsson’s The Girl With the Dragon Tattoo. That story established Lisbeth Salander as an introverted, whip-smart, troubled young woman screwed by the establishment, who absolutely refused to be a victim of her circumstances. She hooks up with ladies-man superstar journalist Mikael Blomkvist (Mikael Nyqvist), helping him research a story that ends up becoming bigger and more dangerous than either could imagine.

Tightening up the book’s narrative, Fire opens with Lisbeth recovering in the tropics from all that befell her in the previous film. Because of some clever hacking, she is financially set for life, but is still stuck under the shackles of the Swedish system, forced to maintain a relationship with what is basically a social worker for those who are socially unfit to be independent. That asshole is Nils Bjurman (Peter Andersson), her rapist from the first film, upon whom she wreaked quite, er, graphically violent revenge.

As Salander returns to Sweden, Blomqvist and his Millennium magazine editor (and part-time lover) Erika Berger (Lena Endre) have decided to publish an exposé of the gangster-driven immigrant sex industry written by a pair of young journalists. When the young journalists are brutally murdered in their home, the weapon that is found has Salander’s prints on it. Doesn’t help that the gun belongs to Bjurman, whom also shows up murdered the same night. Suddenly Salander is implicated in a triple murder, and has to go into hiding while scrambling to prove her innocence.

As in the novel, there are tons of characters in the film… yet still many important characters are either minimized, or simply glossed over. Scenes that seemed huge in the book, like a scene involving Miriam Wu (Yasmine Garbi), Lisbeth’s lover, and the indestructible and menacing tall blond giant (Mikael Spreitz) happen in a handful of minutes, which kind of throws you as you reflect that it was pages and pages of tension in the book. The mysterious menace of the film is an ex-Soviet gangster named Zalachenko (Georgi Staykov) and his impact felt slightly muted in the film to me (when I read the book, I literally gasped out loud when certain bits and pieces were revealed about him). Plus, the plot of the film sometimes seems a bit rushed–I remember thinking, “Well that happened fast!” (especially considering the book clocked in at over 500 pages).

But, can I go back to Noomi Rapace? She totally makes these films with her bad-ass cyberpunk look and blank stare. It is hard to convey what goes on in the mind of someone who has lived their life intentionally keeping a poker face, but as she lets out glimmers of emotion and the occasional scowl, you find yourself cheering for her all the way. Lisbeth is petite and no action hero, but she kicks ass just as hard, or harder than any Angelina Jolie-spandex clad assassin. I can’t wait for the next movie!

Extras include an English-language track and a theatrical trailer.