Though an intriguing new nemesis is revealed, The Winter Soldier is overshadowed by a seemingly endless spray of bullets.
By Lindaon October 13, 2014
0 Comments
Our Rating 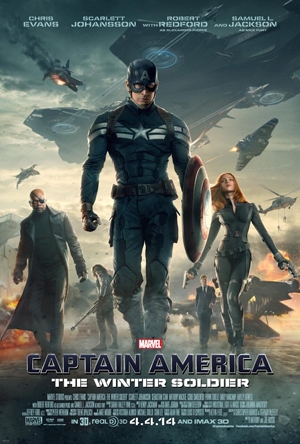 As we all know, there has been a barrage (quite literally… SLAM! BANG! POW!) of superhero movies lately. Audiences can’t seem to get enough, even to the point of revisiting the recast characters again and again (Hello, Spidey and Hulk!). CGI has become so spectacular, that I’m not sure how films are expected to top each other in special effects anymore. That’s probably why I found myself very surprised that I enjoyed the first Captain America movie so much. It was so old fashioned, retro and earnest… a refreshing change from the snark and in-jokes so prevalent these days in pop culture entertainment.

In The Winter Soldier, we catch up (so to speak) with the Captain, Steve Rogers (Chris Evans), as he is racing Bionic-Man speed around the streets of Washington, DC. He is still not quite comfortable in his decades-frozen skin, sneaking off to look at the nostalgic, patriotic museum displays of his World War II heroism. But for S.H.I.E.L.D. and Nick Fury (Samuel L. Jackson), he is still one of their go-to heroes, pulled in to rescue hostages on a tanker ship, for instance, with the help of other S.H.I.E.L.D. warriors like Natasha Romanoff aka Black Widow (Scarlett Johansson).

But something seems amiss. A mysterious and seemingly unbeatable silver-armed assassin called The Winter Soldier (Sebastian Stan) has shown up, with S.H.I.E.L.D. and Captain America in the sights of his endless supply of machine guns. To give away too much would spoil how the plot unfolds, but let’s just say that Captain America can trust no one, and perhaps S.H.I.E.L.D. itself is the enemy.

Captain America: The Winter Soldier toys with distrust of the government, as well as the morality of warfare. It is implied that during the war, good men like Steve Rogers had to do some terrible things to keep much worse things from happening. So, what if a modern political conglomerate took it a step further, and just grabbed all the power violently from the start, supposedly for the good of humanity, so that they could control everything in the first place?

The storyline (which bloats to some 2 1/2 hours) reaches for the moralistic weight of, say, The Dark Knight, but unfortunately never succeeds beyond the depth of, well, a comic book. I still really like Chris Evans’ earnestness and goodness as the Captain. There is also the welcome addition of Anthony Mackie, as Steve’s new pal, who happens to have access to a really cool set of wings. But rather then delving into character development of these people we like, there is a lot of setup (we don’t even see the winter soldier until some 45 minutes in), followed by a lot of extended battle and combat sequences. I found myself exhausted and a bit bored by the constant sprays of machine gun bullets (I’d be curious at the final bullet-count for this film) that overshadowed the characters. When the story of The Winter Soldier is finally revealed, it is an interesting one… but despite the title of the film, his story is only secondary to a whole lot of gunfire and ass-kicking.