The Hunter, on the surface is a thriller, but as a whole it is a surprisingly effective mood piece. 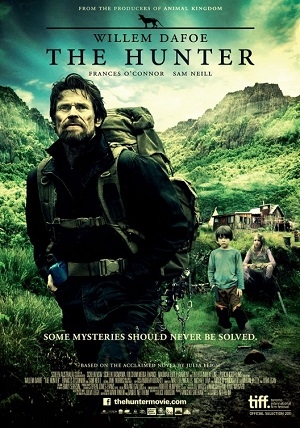 After watching The Hunter, my movie buddy and I discussed, marveled rather, that such a movie got made at all. On the surface, The Hunter has a Hollywood-y plot device. Willem Dafoe is a lone gun for hire, contracted by a mysterious global agency to kill perhaps the last of a rare species of animal solely to get a blood sample for potential (re: $$$) DNA cloning and riches. But the final product is a slow moving, moody tale about a lone man finding peace with what he does before making a decision to change.

The fabled Tasmanian tiger (or thylacine) has been thought to be extinct since the last captive animal died in a zoo in the 1930s. This unusual marsupial, perhaps most closely related to the Tasmanian devil, looked somewhat like a cross between a dog and a large cat, with tiger stripes on its back end, giving it its nickname. Martin David (Willem Dafoe) takes a covert, big-money job to find and kill the animal, which has had mythical Bigfoot-like sightings in Tasmania, Australia over the years. If one can clone the animal, potentially for research, the bounty, it can be assumed, would be endless. Martin doesn’t really care, though, as it is just a job.

The locals bristle at Martin’s presence, though. There is friction in these backwoods area of Tasmania, with not only hunters seeking the Holy Grail of animals, but environmentalists wanting to save the forests (aka destroy local jobs). Martin rents a room at the home of a local named Lucy (Frances O’Connor), whose own husband disappeared months before in the forest, also in search of the tiger. Things are unresolved, Lucy is a wreck, and Martin finds a strange purpose in helping her buck up and take care of her kids whom still think their dad may come home.

The Hunter, on the surface is a thriller, but as a whole it is a surprisingly effective and mood piece. Director Daniel Nettheim takes his time showing Martin’s quest. The setting of Tasmania is beautiful, with the mountains, forests, and lakes. The camera doesn’t flinch when we see Martin butcher and eat a wallaby. And try not to clutch yourself for warmth as Martin sits, soaked in the rain, during another long day on his hunt. Because of this patient pace, you find yourself, along with Martin, looking… straining… to see signs of the animal. You find yourself torn, hoping to catch a glimpse of the creature, but then wishing with all your heart that it will be left in peace if it does, indeed, still exist.