Better sit on a plastic bag, because The Hurt Locker is so intense that you may just soil yourself. 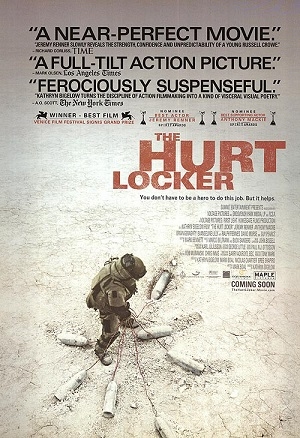 Director Kathryn Bigelow’s tale of an Iraq war bomb squad is a lesson in film editing for maximum impact. The Hurt Locker has the urgency of news footage (which isn’t surprisingly as the screenplay was written by journalist Mark Boal who was embedded with a special bomb unit in Iraq), and has the shaky intense camera angles to prove it. This film is physically in the face of the characters, so you are given as much information as these men in constant danger. You find yourself wanting to paw at the dirt with them, or to squint to see suspicious figures far off in the deserty distance. Or you may simply want to run away.

Jeremy Renner plays Staff Sergeant William James, who is placed with an established bomb team to replace their respected and trusted team leader (Guy Pearce, in a cameo) who was killed by a bomb he was trying to diffuse. James shows immediately that he knows what he is doing, but it is also apparent that he is completely a loose cannon who plays by his own rules. When you are a loose cannon on a team like this, your actions can easily end up wounding or even killing one of your own men. His testy squad includes a steady professional who clashes with James (Anthony Mackie) yet grows to warily respect him, and a wet-behind-the-ears soldier (Brian Geraghty) whose terror sometimes overwhelms his training, even though he is completely qualified at his job.

But The Hurt Locker is barely about the soldiers. Truthfully, one of the film’s weaknesses is that you barely get to know these guys. You are presented with personal information only as the men present it to each other. You learn about James as his fellow soldiers do. And since the film is basically sequence after sequence of unbearably tense assignments where their lives are at stake, well, there isn’t a lot of time to sit around and chat.

But boy-oh-boy are these intense sequences well done! The beginning of the movie sets us up with the incident where the original team leader loses his life. He is fitted with a suit made of bulky armor that is so padded that he can barely walk. In the meantime a little robot with a camera has been sent out to inspect a suspicious pile on the road that may be hiding a roadside bomb. The robot gets stuck, so the team leader has to check it out. You can feel the heat and the tension. As the viewer, you find yourself getting increasingly nervous as regular citizens (or are they terrorists?) hover in windows and doorways along the road, peering at the action. The team is jumpy. You are jumpy. Then it all goes to hell.

And that is just the first freakin’ scene of the whole film! After every sequence, I found myself throwing my arms up in the air in exasperation, saying, “Well, now they can’t top that, now, can they?” And then the next scene would begin, and it would take it up another notch.

The Hurt Locker is not a perfect film. Like I said, there is very little character development, but realistically, the way the film is structured, there is little time for it. Plus the last act of the film involving James kind of fell with a big thud for me (“Uhhh… that was it???”). But that said, it displays perhaps the most well-crafted scenes of extreme tension (one after another) that I’ve seen in a long time. As an action film, it certainly does its job. The Hurt Locker ends up resonating well beyond its closing credits because you can’t shake the fact that the action is happening in war zones right now. Let’s just hope those brave soldiers have everything they need to get their jobs done.