It’s the kind of movie that leaves me thinking I don’t understand the story, only to find out there never was one to begin with. 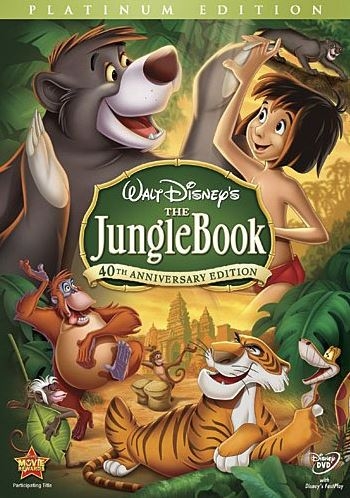 As Disney movies go, The Jungle Book will never be my favorite. Like Peter Pan, it lacks a linear storyline, and consequently feels messy and neverending. It’s the kind of movie that leaves me thinking I don’t understand the story, only to find out there never was one to begin with.

Adapted from the classic book by Rudyard Kipling, The Jungle Book follows the journey of Mowgli, a young boy who has been raised by wolves. The jungle is all he has ever known, but he must leave before he grows into a man, or face the wrath of Shere Khan, a terrifying tiger who hates humans. Led by Bagheera, the trusty panther who rescued Mowgli as a baby, the little boy sets out to find the man-village.

Along the way he meets a hypnotic snake who sounds an awful lot like Pooh Bear, a herd of marching elephants, and the lovely Baloo, a kindly bear who so famously sings about the “Bare Necessities” of life. He’s also kidnapped by monkeys and serenaded by a sloppy orangutan. Each encounter results in a zippy musical number, and finally Mowgli faces down the evil Shere Khan with the help of his friends.

Having faced the tiger, the choice to stay in the jungle or find the man-village is Mowgli’s, but once he spies a pretty little girl singing at the water’s edge, his mind is made up. At first I thought she was singing a song about gathering water “tea lime grown”, and I spent awhile wondering what the hell “tea lime” is and why she had to grow it. Finally I worked out that she was moping because she had to gather water “til I’m grown”. Then she could get married, have a daughter, and make her do it.

Mowgli’s eyes glaze over as he watches and listens, and it’s pretty obvious that he’s going to be the one to marry her one day. And so the man-cub leaves the jungle, just like that, and finally we’re done with it. If this is a childhood favorite of yours, you’ll undoubtedly revel in the beautifully restored animation. However, if you’re an adult watching it for the first time, you might find yourself getting a little twitchy.

The real selling point of these Platinum Edition DVDs is the seemingly endless supply of extra features. Disc One contains the feature film, as well as “The Lost Character: Rocky the Rhino”, deleted songs, and the atrocious teeny-bopper music video for “I Wan’na Be Like You”. Disc Two contains two sections of extra features: Man Village (for the grown-ups) and Jungle Fun (for the kids). Man Village includes a hefty 46 minute making-of documentary, a segment on Disney’s adaptation of Kipling’s book, and vintage interviews with the film’s animators. It also explores “The Lure of The Jungle Book”, and how the film influenced a whole generation of animators. In “Mowgli’s Return to the Wild”, we catch up with Bruce Reitherman, the voice of Mowgli and the son of the film’s director. Turns out the real Mowgli grew up to be a documentary filmmaker specializing in wildlife. Cool!

Language and matching games will keep little kids busy as they poke through the Jungle Fun section. I thought one might actually encourage kids to get off the couch and move, but it too turned out to be a matching game. There’s nothing very challenging in the mix, but I’m sure kids will enjoy exploring the extra materials after the movie. You can’t say Disney didn’t try to pack as much into this special edition as humanly possible.