Next thing you know, these soldiers are having a snowball fight, tumbling around, then making out.
By Lindaon October 12, 2013
0 Comments
Our Rating 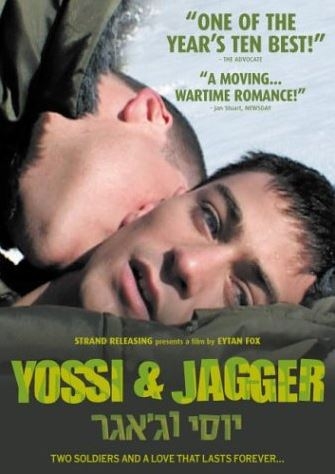 A refreshingly sweet yet no-nonsense love story, the Israeli gay-soldier romance Yossi & Jagger manages to do in a brisk 65 minutes what so many American films of the same genre fail so miserably at: introduce us to well-developed characters that we care about, without resorting to eyeball-rolling stereotypes.

Almost all the action of the film takes place in a small mountain military outpost, where a handful of soldiers, both men and women, pretty much while away their time, waiting for something to do. Yossi (Ohad Knoller), the group’s commander, is a seemingly humorless bulldog of a leader; a badass who obviously is born for the job. Jagger (Yehuda Levi) is his second-in-command, a good soldier who takes his responsibilities seriously. When the two men don their guns to trudge across the snow to survey a remote area, you think, well, this will be a typical military drama with some added repression. But next thing you know, these two men are having a snowball fight, then tumbling around flirtatiously with each other, obviously picking up where they had left off. Turns out Yossi can be a puppy as well as a bulldog, and Jagger is simply adorably cute and charming. These two characters win you over in a matter of minutes.

This film is so efficiently constructed yet well-written, that you also get to know several of the other soldiers: Yaeli has a crush on Jagger, but doesn’t realize that she is not in his realm of interest. The handsome but vaguely desperate Ofir has a crush on Yaeli, and a severe jealousy towards the charming Jagger, whom he can’t quite figure out. There’s even the camp cook, who has hilarious monologues about the artistry of his job, expounding about his own personal favorite creation, Spam-sushi. All these characters (and more) manage, in a few minutes of screen time, to impressively resonate with the viewer as fully-realized characters that you immediately care about.

Jagger often jokes with his closeted and private lover Yossi that he wants their romance to be like an “American Movie”—replete with public and dramatic professions of love, with the main characters walking off into the sunset hand-in-hand. So I found it somewhat ironic (and sad) that Yossi & Jagger ends not like a classic romance, but more like a classic war “buddy film” (I’ll let you figure that one out). They are soldiers, after all.