Bill Murray is literally in every scene of Broken Flowers, and the majority of time he is basically expressionless.
By Lindaon December 27, 2014
0 Comments
Our Rating 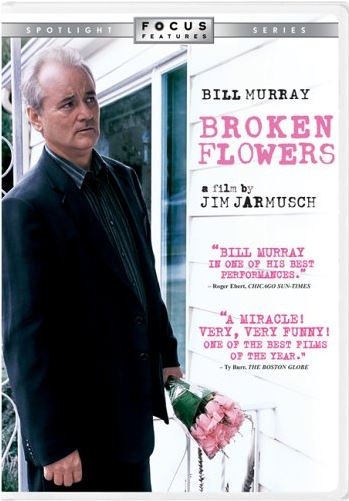 Bill Murray seems to have had a resurgence in his career by portraying the drollest of the droll. He’s like a washed-up comic who doesn’t bother cracking a joke anymore, which is what makes him all the more funny. He is the straight man to the chaos around him, and his puppy-dog weary eyes make him a sympathetic everyman. This everyman trait was used to perfection in Sofia Coppola’s Lost in Translation (my favorite movie of 2003), and now indie auteur Jim Jarmusch has modelled Broken Flowers around this same Bill Murray Character for the new millennium.

Murray play Don Johnston (“No! Not ‘Don Johnson’! ‘Johnston’ with a ‘t’!”), a world-weary aged Don Juan, who has just been dumped by his latest girlfriend (Julie Delpy, who is only in the movie just long enough to walk out of it). When she leaves, she literally walks past the freshly-delivered mail, where a pink envelope from one of his former loves claims that he has a 19-year-old son that he never knew about, and the kid may be on his way for an unannounced visit. Except the letter is not signed, and as far as Don knows, it could be from any number of women from his 20-year-old past. Don’s neighbor pal Winston (the always-enjoyable Jeffrey Wright), who fancies himself an amateur sleuth, thinks Don needs to go find out which of these women wrote this letter, and has taken it upon himself to prepare for Don an itinerary (complete with airplane tickets and car rentals) in order to find the answer to this mystery. Reluctantly, Don goes along with this plan, and gets on his first plane.

Bill Murray is literally in every scene of Broken Flowers, and the majority of time he is basically expressionless. Often the camera lingers on him as he sits and does… nothing (thinking? regretting? contemplating? spacing out?). But fans of Jim Jarmusch’s work come to expect the long pauses, and bordering-on-uncomfortable stretches of not-a-heck-of-a-lot happening. But I’ll warn you: this style is not for everyone, and may make other viewers want to claw their eyes out in restlessness.

If you can take this style of filmmaking, Broken Flowers offers the treat of showcasing a handful of wonderful actresses “of a certain age” (i.e. over forty). Playing the variety of women who may or may not have written the letter, Sharon Stone (whose turn with Alexis Dziena as her daughter is pretty hilarious), Frances Conroy (LOVE her and her subtly twitchy mannerisms), Jessica Lange (still hot), and Tilda Swinton (unrecognizably white-trashy) each gets their turn to shine. It is almost as if Jarmusch just uses Murray’s character as a backbone excuse to write scenes for these wonderful women… and why not?

I’ve liked much of Jarmusch’s previous work, but I can see that some may find a bit of a problem with his pacing in Broken Flowers. A lot of it is slow, and at times, not a lot happens. I’m not saying this film is brilliant (it has received much advance praise, most notably from Cannes), but if you can lower your heart rate for a couple hours, it is a rewarding and quiet film. No explosions, no special effects… just an everyday guy coming to grips with his past.