“What’re you rebelling against, Johnny?” Brando answers, “Whaddya got?”
By Lindaon December 27, 2014
0 Comments
Our Rating 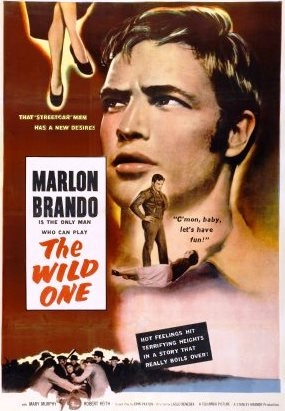 In The Wild One, Marlon Brando was the original “rebel without a cause” (as this film came out a year before James Dean’s film). Brando plays Johnny, the leader of a motorcycle gang, who cruises into a small town with his pack of hooligans and pretty much terrorizes the folks. When a local girl asks Johnny, “What’re you rebelling against, Johnny?” he answers, “Whaddya got?”

Young Brando is all brooding menace and swagger, in his black leather motorcycle jacket, tight jeans, and tilted cap. He has a dark past that he won’t share, even with the café girl he takes a shine to (Mary Murphy). He’s like a boy on the playground, anyone can tell he likes her because he’s basically mean to her, but he helps her get out of rough situations when his cronies get too wild. He has the wounded-rebel look, he needs help, but won’t ask for it and won’t accept it. He’s a reluctant leader to the pack of morons that follow him, but will take responsibility for their actions in a big-brotherly way.

The Wild One is certainly a movie of its time, especially influenced by the anti-establishment Beatnik subculture. Brando snaps his fingers in someone’s face when he is making a statement. The hooligans put jazzy songs on the jukebox and call the townspeople “squares”. A flustered barkeep has troubled understanding any of the “jive” that the boys are talking about. The film moves along at a fast pace, and doesn’t overstay its welcome at only 79 minutes. Though The Wild One is a bit dated, it’s dated in a very entertaining way. “Can you dig it?”