In the Bedroom, despite heaps of praise by critics, is only 2/3rds of a great movie. The whole middle act has some of the most powerful, gut-wrenching repression of feelings that I’ve seen since The Ice Storm… but I’ll get to that in a second. 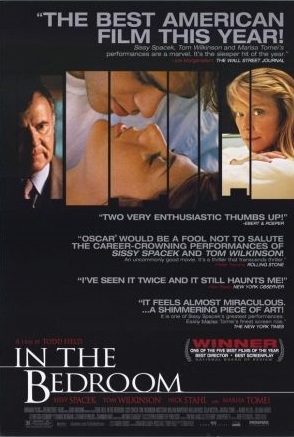 There has already been much criticism of reviewers giving away too much of the plot beforehand, which spoils somewhat of the “surprise” of the film, so I’ll do my best. The basic characters are college-boy Frank (Nick Stahl) dating an older woman (Marisa Tomei… acting!) who not only has a couple of kids, but a very jealous not-quite-ex-husband (William Mapother… with sleazy moustache and bleach-tipped hair). Then there are Frank’s parents Matt (Tom Wilkinson) and Ruth (Sissy Spacek), who are dealing with their own conflicting feelings about young Frank’s romance, which mask the unspoken problems in their own relationship. Just when things seem all rosy (director Todd Field strings you along for a pleasant half hour or so), there is a horrible tragedy, and we are left in the stifling emotional space of the remaining characters dealing with their pain.

There is very much I liked about this film, especially the performance of Tom Wilkinson. Always a fine actor in any film he is in, he really ends up carrying this story. He’s just a regular guy, going to work, playing cards with his buddies, visiting his son down at the fishing harbor on his lunch break. When his life is turned upside, things in his life seem suddenly… normal. No one speaks of the tragedy. He mows his lawn. He watches game shows in the middle of the night. His wife never talks about it. His friends avoid the subject. Sissy Spacek is also especially good, but it was Wilkinson that I couldn’t keep my eyes off of.

Director Field adds interesting touches, such as having almost no soundtrack except, of all things, Bulgarian choir music (an interesting touch—the passionate Eastern European folk songs a nice contrast with the emotional repression in American culture). There are also lots of fade-outs between scenes. Lots of silence.

But here’s my complaint about In the Bedroom. I’ll try to not be too detailed, but you may want to stop reading now to avoid any spoilers….

My complaint is that after such a great peek into an all-American family dealing with grief for the bulk of the film, that the ending was a total cop-out. The ending was very “typical,” turning an excellent, true film into a Hollywood film. I didn’t think for a second that the conclusion was true to the main characters whom we had come to know. It took me out of the story, and left me and my friend grumbling all the way to the coffee shop for a discussion.

However, for fine ensemble acting (which is not always easy to come by these days), In the Bedroom is definitely worth a viewing. Decide for yourself how you feel about the conclusion… maybe you’ll be on the side of the critics, and add it to the pantheon of the best films of 2001. 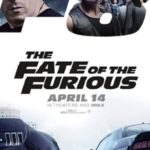 PreviousThe Fate of the FuriousNextHot Docs 2017 #1: Here We Go Again!