Un Coeur en Hiver walks a tricky line, but it is a solidly satisfying character study that takes you unexpected places. 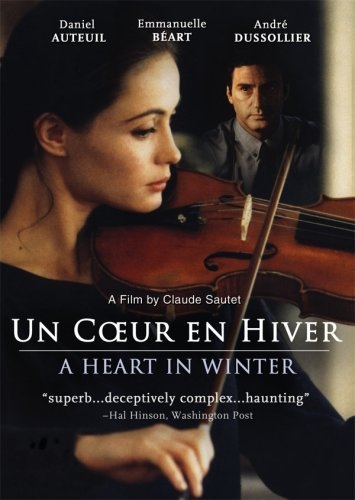 Daniel Auteuil, in a performance that is almost entirely passive, creates a character that somehow sticks in your craw. His Stephane is a handsome and humble man, and is very skilled at his job as a repairer and craftsman of violins. He seems content at his job and his small life. He ruffles no feathers, and is one of those people who is practically invisible.

But Stephane catches the eye of his work-partner Maxime’s new younger lover, the violinist Camille (the always-passionate Emmanuelle Béart). Camille is intrigued by this man who at first seems to simply shadow his friend Maxime. But she can see that he has a true and intense appreciation for music. She takes his interest in her playing as romantic interest, and maybe it is. She in return becomes obsessed with Stephane.

If this film were anything but French, the two would-be lovers would hook up behind Maxime’s back, and Maxime would slink away, slump-shouldered in defeat. Or else he would kill Stephane. Or Camille. Or both. But here is where Un Coeur en Hiver takes a veer from the typical. Stephane rejects gorgeous Camille’s advances, and she is floored. A would-be seduction turns into a bizarre rejection that is as unexpected for the viewer as it is for Camille. At that point, I was hooked.

Stephane should be a loathsome character, as he is consciously manipulative and stand-offish, luring Camille knowingly just because he can. But Daniel Auteuil does something strange with this character, and it is bafflingly hard to describe. You don’t hate Stephane. If anything, he is pathetic rather than hateful. What he does is clearly cruel, but he is the one whose “heart is in winter”. He doesn’t know the raw cruelty of his actions, and the other characters slowly pick up on this as well.

Stephane is a bizarre and intriguing creation, and Auteuil’s portrayal proves how an exceptional actor can do unexpected things with a character whose actions should seemingly should be black-and-white. Un Coeur en Hiver walks a tricky line, testing your acceptance of Stephane, Camille, and Maxime’s flaws, but it is a solidly satisfying character study that takes you unexpected places.

The DVD includes extended interviews with the late director Claude Sautet who hit his artistic peak late in life with this film and Nelly & Monsieur Arnaud. Despite the copious amount of interview time included, it is a bit frustrating that he seems to be talking about just about every one of his movies except Un Coeur en Hiver. Still, he has nothing but fond things to say about Daniel Auteuil, whom talks about at length when discussing their earlier collaboration A Few Days With Me (Quelques jours avec moi). If you are looking for more insight about Un Coeur, however, you will have to do your research elsewhere.