Though it has a two-movies-in-one structure that may make you check your watch, the family drama Waves boasts some of the most moving, gorgeously-shot scenes of the year.
By Lindaon November 25, 2019
0 Comments
Our Rating 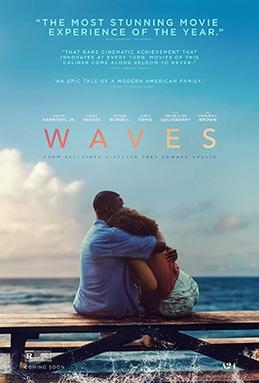 In the opening moments of Waves, the camera spins euphorically as it follows a day in the life of 18-year-old Tyler (Kelvin Harrison Jr.). He goes to school, he works out, he hangs with his friends, and—most memorably in the opening shot—drives down the sunny Florida highway with his girlfriend hanging out of the car window, as the camera spins 360 from the front seat. It is a cool, if barf-inducing effect that is repeated pointedly later in the film.

Tyler has everything going for him–he is a talented athlete, has a lovely girlfriend, and is applying for college. But as we all know from every movie ever, his model upper-middle-class African-American family is not as perfect seems. His dad (the always-good Sterling K. Brown) is a hard-ass that pushes his son to achieve things he never could. His mom (Renée Elise Goldsberry) and sister Emily (Taylor Russell) seem to hover on the sidelines of the domineering male figures in the house. Suddenly Tyler’s perfect house of cards start to topple; his health, his relationships, his future, spiraling to a seemingly inevitable tragedy of his own doing.

Right there, you seem to have watched the whole film (and Tyler’s story is almost feature length), but then Waves switches dramatically and starts to follow younger sister Emily, shortly after the events of the first half. You realize you know barely anything about her, except in the context of her brother. But you meet a quiet, shy, lovely young woman who slowly (and very cutely) is courted by dorky Luke (Lucas Hedges), and who, in her own way, faces some very sobering situations but handles them much more maturely than her brother.

As a whole, I wasn’t as swept up in the characters as I felt I should be. Maybe it was because Tyler was not very sympathetic. Maybe it was because I’m tired of stories centered on a promising young man’s downward spiral. Maybe it was because Emily was more interesting than the film gave her credit for (she was only allowed to blossom in the presence of a boyfriend/father/brother—this film, I’m sure, does not pass the Bechdel Test). Maybe the experiment of merging two completely different movies into was too jarring… or just too long.

But the thing is, Waves IS gorgeously filmed and extremely well-acted by all involved. Instead of reflecting on the movie as a whole, I find that scenes and images that stay with me: Emily cradling her sobbing brother; Emily and Luke swimming with manatees; Luke visiting his dying father; Tyler knowing the moment his athletic career might be over. Rather than taking the film as a mildly frustrating whole, I’ll remember it as a montage of powerful moments… and some of these moments are the best you will see in any movie this year. 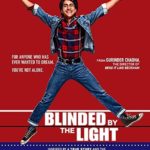 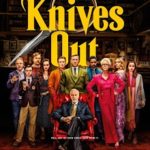