Ambitious epics can truly be great, as well all know, but is Cloud Atlas one of those great epics? Errrr…
By Lindaon October 26, 2012
0 Comments
Our Rating 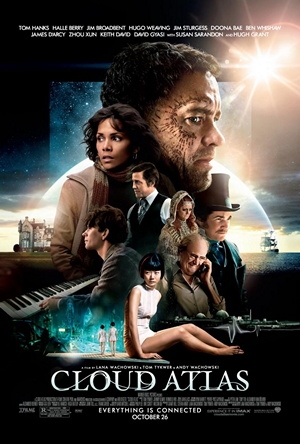 The popular and acclaimed novel Cloud Atlas by David Mitchell was deemed unfilmable, and it is not hard to see why. The plots span at least four centuries (maybe more? the future is uncertain) and six separate stories. Throw in three directors (Lana and Andy Wachowski, and Tom Tykwer) and a massive cast (including four Oscar winners—Tom Hanks, Halle Berry, Jim Broadbent, and Susan Sarandon—as well as talented folks like Hugo Weaving, Hugh Grant, Jim Sturgess, Doona Bae, and Ben Wishaw), and you have an almost three-hour movie that is so bloated and massive in all possible ways that I had to loosen my belt while watching it.

Among the many plots, we have a 19th-century lawyer befriending a stowaway slave on a ship bound back for North America; a 1970s reporter investigates a potentially disastrous cover-up at a nuclear plant; a modern publisher gets stuck against his will in a nursing home, where wackiness ensues; and a futuristic yet primitive village dweller serves as a guide to a technologically advanced visitor.

Two of the plots piqued my interest more than the others. In a futuristic version of Seoul, a clone-like fast food waitress (Doona Bae) is rescued by a resistance fighter (Jim Sturgess) who plants in her the seed of rebellion. The sets of this sequence are fantastic (not surprising, considering the Wachowskis sci-fi background), and there is fast, exciting Star-Wars-y action. In the other story, a young, musically gifted ruffian (Ben Wishaw) becomes assistant to a famous composer (Jim Broadbent) in the 1930s. From their musical partnership emerges a sort of otherworldly symbiosis of their talents, though a power play threatens to take any musical credit from the young man for their collaborations. But the problem with these stories was that I felt that both plots could have been fleshed out into their own movies.

The over-arching theme of Cloud Atlas is that across space and time, our actions influence and affect one another, and these actions can ripple for generations. In a pretty neat (if kind of distracting) gimmick, the filmmakers have the same actors play not only different characters through the various stories, but often different races and genders. But it seems that while importance of ideas and look have been loaded onto this movie, it leaves out one important thing: soul. I didn’t really care about any of the characters. I found myself thinking, “I like Jim Broadbent’s face…” or “Why does Hugo Weaving look like a cross between Leprechaun and Something Wicked This Way Comes?” My friend just slept through much of the movie, trying to rouse himself whenever it looped around periodically to a story he was interested in.

In my experience you can call a project “ambitious” without necessarily praising it or insulting it. Cloud Atlas is most certainly ambitious. But is it as important or interesting as it pretends to be? Not really. The book must do it better. But when the movie doesn’t inspire me to pick up and read the book right away, that has got to be a bad sign. 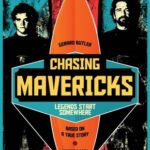 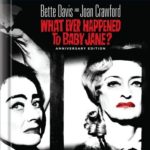