Zootopia is kind of a genius metaphor for the United States, or your nearest metropolis, or really any place that will allow you to escape the confines of your life and assimilate into a diverse, open-minded world of opportunity. It’s the kind of place where anyone can be anything as long as they’re willing to work hard and dream big. In Zootopia ANYTHING Is possible…you know, until it’s not. 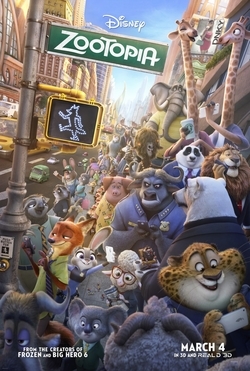 Even as a tiny bunny, Judy Hopps (voiced by Ginnifer Goodwin) knew she wanted to grow up to be a police officer. This sort of thing is unheard of in her tiny hometown, but not in Zootopia where all animals live together in harmony, whether big or small, predators or prey. True to her word, Judy enters the police academy and lands a job in Zootopia, but things are not quite as perfect as she imagines.

While it is possible to pursue one’s dreams in Zootopia, no one ever said it would be easy. Judy meets adversity every step of the way, and though opportunity exists, so do the same stereotypes that held her back at home. Though she graduates at the top of her class, Judy is relegated to parking duty when she finally reports to work. The reality is that no one believes a bunny can be a good cop.

Determined to prove everyone wrong, Judy throws herself into her work. She knows she should be working a massive missing persons case along with everyone else in the department, but she’ll never get the chance unless she shows everyone what a bunny can do. Using clues she uncovers on parking duty and mining the knowledge of a clever fox, Nick Wilde (voiced by Jason Bateman), Judy manages to crack the case of the missing predators and uncovers a conspiracy in the process.

It’s a charming buddy comedy centered around a genuine mystery that also serves as a parable about trust and acceptance. Judy must face her own fears about otherness in Zootopia (she’s always been told to steer clear of foxes), but in Nick she finds a friend, an ally, and a kindred spirit. Somehow this obvious lesson in embracing differences and working together doesn’t seem heavy-handed. Instead it serves as a cheerful, engaging romp for the whole family.