I can only think that this movie would have our founding feminists rolling over in their graves.
By Jenniferon October 12, 2013
0 Comments
Our Rating 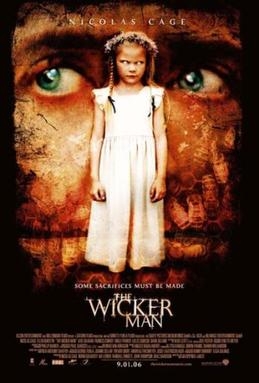 I always imagined that The Wicker Man would be about a great big Wicker Man lumbering across the countryside, wreaking havoc and scaring the bumpkins. Oh, and he’d also be on fire. This is all I could glean from the cover of the original, so you can imagine my surprise when I found out the movie is actually about a bunch of crazy women. Who would have thought?

It all begins with a routine traffic stop. Officer Edward Malus (Nicholas Cage) pulls over a woman whose daughter has just chucked her doll onto the highway. The mother smiles sweetly and apologizes, but the little girl just stares at him. He returns the doll and lets them off with a warning, but the little girl continues with the defiant staring, then flicks her doll back out the window. While our exasperated hero goes to fetch it, a semi plows into the car, killing the mother and child.

Traumatized, Edward drops off the radar. He can’t work, and he can’t stop replaying that horrific scene in his mind. Needless to say, he’s in a very vulnerable state when he receives a letter from his ex-girlfriend. It’s been years since she abruptly walked out of his life, but now she’s got a missing daughter, and he’s the only one who can help. Um… ’cause he’s a cop, and she lives on this weird island off Washington State… and their police department isn’t any good. Or something. The details are certainly sketchy, but Edward feels he must rise to the occasion.

Against the advice of friends and colleagues, Edward heads to the Pacific Northwest, bribes a pilot, and drops into an alternate universe where Little House on the Prairie meets The Twilight Zone. He’s met by a bunch of old-fashioned-looking people who seem to be carrying a body bag, but Edward is undeterred. He locates his old girlfriend (Kate Beahan), who pretends to be an outsider on this Island of Misfit Toys: “Woe is me. Ou-, I mean, my little girl is here somewhere, but no one will help me find her. I wish I’d left this place when I had the chance.” Thinking he has at least one ally, Edward goes poking around the island, asking questions and looking for clues.

It doesn’t take a rocket scientist to figure out that Edward is the father of the mystery girl, but it takes this super sleuth awhile to catch on. In the meantime, he’s got far more questions than answers. Who’s the little moppet he keeps seeing out of the corner of his eye? Why are there no boys on this island, and why are the men such a bunch of tools? What’s up with the festival they’re all planning? And why the heck isn’t Girlfriend more helpful?

Convinced that his little girl will be sacrificed to the Fertility Gods, Edward dons a bear suit and joins the islanders for their freaky fertility festival. He blends right in with the others, who are wearing animal masks and reciting odes to honey. Just as he suspected, they are preparing to make a sacrifice to the gods, and his poor daughter is tied to a stake like a feeble little lamb. Will he manage a daring escape, or will another staring girl lead to Edward’s ultimate undoing?

Somehow seeing Nicholas Cage in that bear suit takes the edge off his shocking encounter with The Wicker Man. It’s a twisted story on par with the best urban legends, but I couldn’t help wincing at the film’s portrayal of women. Admittedly, people who feel the need to go off and join communes have probably discovered that they can’t find happiness in the confines of modern society. Having balked at all acceptable alternatives, they retreat to a world where their peculiar ideologies can flourish. However, the women of this island have done little to improve their lot in life. They may reign supreme, but their opportunities are limited, the days are fraught with housework and manual labor, and their lives revolve around procreation. Worse yet, by regarding men as disposable, these women become despicable. I can only think that this movie would have our founding feminists rolling over in their graves.