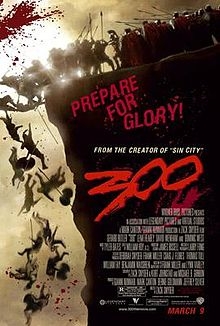 I’ve thought Scotsman Gerard Butler was a manly-man hottie ever since seeing his sensitive yet swarthy self in movies such as Beowulf & Grendel, Dear Frankie, and, yes, even Phantom of the Opera (where he gave good eye, despite the mask). My attention perked up when I heard he was playing Spartan King Leonidas, and being paired up with indie hottie-in-her-own-right, Lena Headey (Vickie’s personal fave) as Queen Naboo… I mean Queen Gorgo (wow… “Gorgo”… how unfortunate!). But, I’ll admit, like probably everyone out there, my attention was finally grabbed when I saw the previews of 300. My. God. Look at all those oiled-up six-packs and muscular thighs! Are those soldiers really wearing only capes, sandals, and snug, packed, leather briefs? Oh!

But, Gerard, bless your heart and fine muscular structure, as soon as 300 got going, I wasn’t the only one who giggled when your ancient Spartan growled with a Scottish brogue, “Aaarth and waaahter… Yooo’ll find pleanty down theyr!”

Ask any fanboy, and I’m sure he’ll tell you he’s is not in line to see 300—referring to the 300 Spartans who fought against a million or so Persians in the Battle of Thermopylae in 480 B.C.—for its historical accuracy and inconsistent faux-Spartan/Persian accents. No, he’s (supposedly) not in line because it is the most homoerotic movie since Brad Pitt’s honey-baked ham was flexed in Troy. He’s here to worship the visually impressive adaptation of Frank Miller’s (Sin City) comic… I mean “graphic novel” to the big screen.

Knowing that the source is a page-turner made up of singular images, you can just about map out the scenes in the movie by their corresponding panels in the comic. (In fact, after sneaking a peek at a couple pages in Frank Miller’s version, I was actually shocked at how close the film stuck to the original source.) A boy is quickly raised to be a man and a warrior. He becomes King, kicks Persian King Xerxes’ messenger down a well after receiving a threatening proclamation, and decides to fight the impending invasion. King Leonidas ignores the “Avoid war! Don’t do it!” advice of a spinning oracle and her festering boil-covered keepers. The King spends his final night at home making sweet Spartan love to the Queen. Then the soldiers, in all of their oiled-up glory, march—once the action begins, it never lets up until the last frame.

Despite the distraction of comic-book level dialogue, and my personal confusion of not catching most of Leonidas’ soldiers’ names (I mentally referred to them as The Old One, The Old One’s Hot Son Who is Destined to Die, The Son’s “Friend” Who Should Be His Lover, etc.), I will say that 300 is exactly the movie it pretends to be. There are plenty of scenes that are stupendously beautiful on screen, and I’m not just talking about rippling abs and thighs. The oracle—of course a young, err, “perky” barely-clad woman—spins slowly in the air with fabric billowing water-like around her (making me think for a moment that I was watching a Bjork video). And there is a slow-mo, carefully choreographed take of the King working his way through a crowd of Persians, sword swinging and thrusting, muscles flexing, and blood flying. Any frame of that scene, and most others, looks like an amazing painting, despite the fact that most of it was CGI, and shot against a blue screen.

As I walked out of the theater, I encountered a moment that sums up 300‘s target audience perfectly: A 30-something big white guy with a scraggly ponytail was leaving the theater with his tiny, cute girlfriend. As he flip-flopped his way down the sidewalk in his baggy shorts and parka (typical ridiculous Seattle-style for a cold, rainy March day, by the way), pulling his woman along by the hand, he immediately flipped open his cell phone to call his pal. Over the course of the many, many blocks we had to follow him, he recounted his full detailed review of the movie, concluding that it was “fucking awesome” and that he was ready to turn around and pay full price to see it again and again. Long after we found our car, we could see him still on the phone ignoring his woman. So, obviously Frank Miller’s fanboys were pleased with 300—and as long as the fans approve, I suppose you can just say that the movie has done its job.