There are only a handful of films that have made me physically queasy with unease (among them Silence of the Lambs and Last King of Scotland). I can now add Paranormal Activity to that short list.
By Lindaon October 28, 2009
0 Comments
Our Rating 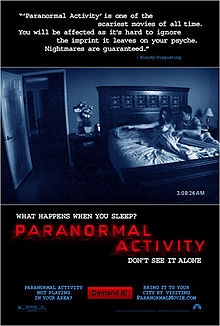 In this era of YouTube where anyone and everyone posts home videos of their cats, their kids, their musings on life, etc., it is surprisingly easy to accept a feature film that is disguised as a home movie. Yes, it has the Blair Witch conceit of being presented as “real” footage, but to director Oren Peli’s credit (as well as the easy-to-accept actors Katie Featherston and Micah Sloat as the haunted young couple), you fall for the film almost immediately.

The gist of the story is that after noticing some sounds in their house at night, Micah brings home a fancy video camera to try to catch footage of any strange happenings that may occur while he and Katie are asleep. The camera is propped in the corner of the room, aimed towards the bed; the couple turns out the lights, and they go to sleep….

A big chunk of the movie is just that: the same dimly-lit camera’s-eye view of the bed, the sleeping couple, the open bedroom door, and the dark hallway. You find yourself staring really, really hard at that open door. You are maybe leaning forward a little, peering… squinting. There is no soundtrack, except maybe an ominous white-noise hum. So that when something does go bump in the night, you just about fall out of your seat in fright while the couple on screen jumps awake in terror.

Paranormal Activity was famously made for $11,000 (with another $4,000 tacked on when Steven Spielberg saw the film and suggested tweaking the ending). With its minimal budget, the film offers minimal information… and that is why it works so well. The best horror movies are the ones that don’t show, but rather imply. If you have ever been startled by mysterious things that go bump in the night in your house, this film may just scare the poo out of you. It worked for me, I’ll tell you that much. As I left the theater in broad daylight, I thanked my lucky stars that I had decided to see a matinee instead of an evening show. Let’s just say that there’s no way I could have gone to bed right after seeing this movie. 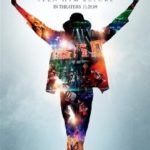