There may not be 300 Spartans this time (we all know how well THAT went). However, there are still plenty of bare-chested Athenians… and, most importantly, this time there is Eva Green.
By Lindaon July 25, 2014
0 Comments
Our Rating 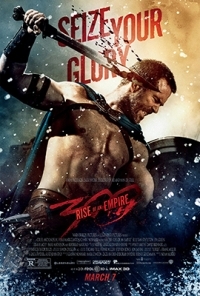 In this prequel/sequel/at-the-same-time-as-300-quel, we are introduced to hunky Athenian general Themistokles (Sullivan Stapleton). We learn in the opening scene that 10 years ago he gained a bit of a reputation for shooting an arrow in the middle of the Marathon battlefield and taking down the invaders’ Persian King Darius. Darius’ son Xerxes (beautiful Rodrigo Santoro) is so paralyzed with distress that the king’s sort-of-adopted Greek daughter Artemisia (Eva Green) takes matters into her own hands and tosses Xerxes into a magic pool, barking out, “Avenge him!” or some such thing. Next thing you know, Xerxes is birthed from the pool as a beautiful, gold-plated man-god who is so tall that you could put an eye out on his jewel-encrusted codpiece. Xerxes wants revenge on the Greeks. Artemisia is hellbent on her own wrath (Greeks raped and murdered her family, and the Persians took pity on her, raising her as a warrior). The stage is set for a showdown.

Let’s just get a few things straight: The 300 films, based on graphic novels by Frank Miller, are like Greek history for dummies. It is as though you are looking at a comic with stupendous graphic images, where dialogue is secondary. You don’t have to remember the tongue-twisting names, really, except that by default everyone is really really hot, outfits are conveniently color-coded so you can tell good guys from bad guys, and there is a lot of blood splashing. A LOT.

Did I mention that everyone is hot? Now, I have no idea who Sullivan Stapleton is. In fact, it kind of bothered me that he has kind of an “every guy” handsomeness to him, so seemed really familiar. All I could come up was that I think Themistokles might look like our building maintenance guy, Steve. Next time Building Guy Steve comes to the office to adjust the A/C, I don’t think I’ll be able to look him in the eye, because I’ll just imagine him bare-chested with a beautiful blue cape that somehow, somehow always manages to stay bloodstain-free.

As generically stoic and good-looking as Themistokles is, it’s Eva Green as Artemisia that totally smokes the 300+ pairs of man-breasts that otherwise dominate the film. Green sets the tone for her character early on by beheading a traitor, then making out with him. Yes! Maybe Frank Miller actually noticed that the first 300 film was more than a little homoerotic, with all of those oiled-up chests and skimpy leather briefs. If his thought was to add some over-the-top straight-man (and gay-lady) sex appeal to the story, it sure as hell worked. When Artemisia sex-wrestles with Themistokles to try to make him submit (in more ways than one), it would be laughable if it weren’t actually kind of hot.

Like the first film, 300: Rise of an Empire is all about eye-candy. Plenty of man-candy, and, well, Eva Green (sorry Lena Headey, you just don’t get a lot to do in this). You watch the film knowing that almost everything you see is computer generated, but wow, it really looks great. As silly as it is, and as outlandish as some of the land and sea battles seem (a naval fleet appearing over a “hill” of water? huh?), it is, if anything, always visually impressive.

On the Blu-ray release, there is a half-hour of behind-the-scenes featurettes discussing the production of the film, from Frank Miller’s pitch to the film itself, including “3 Days in Hell,” “Brutal Artistry,” “A New Breed of Hero” and “Taking the Battle to Sea.” There are also short pieces about the warships and strategies of the Greek navy, a bit about how the cast trained for their roles as warriors, and a focus on the women of the series, specifically Queen Gorgo (Lena Headey) and badass Eva Green as Artemisia.