To paraphrase a target audience member (young woman) overheard after the movie, “Just when I started to like it again, it would do something weird…”
By Lindaon July 25, 2014
0 Comments
Our Rating 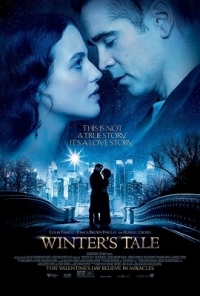 A centuries-spanning fantasy romance, Winter’s Tale stumbles across head-scratching issues almost immediately. In 1895 New York City, an infant is dropped into a model ship into the Hudson River after his parents have been rejected by immigration and sent back to where they came from. Fast forward to 1915, and the child is now Peter Lake, who must be about 20, but is played by Colin Farrell, who is 37 (though still boyish, I’ll give him that) and has a full-on Irish accent. Peter Lake is a low-rent crook who has crossed the gang run by the man who raised him, Pearly (Russell Crowe). But a magical horse (!) saves Peter from the gang… which is the first big hint that something else is going on with this story.

Now, I don’t mind a magical horse. And I don’t mind that Pearly is actually some sort of demon on earth, making his way through humanity as a sort of thug for Lucifer. And I don’t mind that there is a fantastical romance as Peter crosses paths with a beautiful, dying young woman when he breaks into her family’s mansion. Peter is convinced through visions that he is meant to save a red haired girl, so as his whirlwind romance with lovely consumptive Beverly Penn (Jessica Brown Findlay, whom we know from Downton Abbey, is good at dying) proves doomed, I didn’t mind that Peter Lake shows up in 2014 New York, still trying to find his miracle a century later. This sounds like a decent fantasy story, and apparently IS a decent fantasy story, as Winter’s Tale is based on Mark Helprin’s acclaimed novel of the same name.

But Winter’s Tale, the movie, is a hot mess. And boy, I gave it a try… but man, it just doesn’t work.

Everything I’ve read positive about the book references its language and the story’s length. The magic in the film loses its flourish when it is taken at face value. For instance, there are several nice (if throwaway) references to light (the play of light through a room, from stars, through a window), where I would think, “OK, I liked that…” Then there’d suddenly be a scene where Pearly (whose plot is not well integrated, and seems forced) has a meeting with Lucifer (huh?), who is played by, most randomly WILL SMITH (which unfortunately caused the audience to erupt in howls of laughter). The story would then lurch back another direction, another mood, trying to put the pieces together, but failing to keep the audience’s interest. The romance doesn’t work. The time travel has math problems (one old lady would have to be, what… 105? to make it add up). And the fantasy aspects are so clunkily done that the audience giggled, which is not a good sign.

If anything, Colin Farrell’s hair should get a best supporting actor nod. His bizarre haircut, which I’m sure is supposed to be “of the time” proves a fantastical distraction in itself. As Peter Lake gets into a brawl, his hair flips forward as though it is going to fly away and scurry across the ice. Now that I think of it, I think the audience would have loved that. It wouldn’t have been any sillier or unexpected than anything else in this unfortunate mess of a movie.

Blu-ray extra features include a couple of throwaway featurettes, “Winter’s Tale: A Timeless Love” and “Characters of Good and Evil”, with the director, cast and crew discussing themes in the movie, chemistry between the actors, and the usual love-fest. There are also deleted and extended scenes, none of which would have helped the film recover from the mess that it is.