The Hours might at first glance seem like a whole lot of pretentious Oscar-bait. Oscar-bait it is, but the film really is good!
By Lindaon August 24, 2014
0 Comments
Our Rating 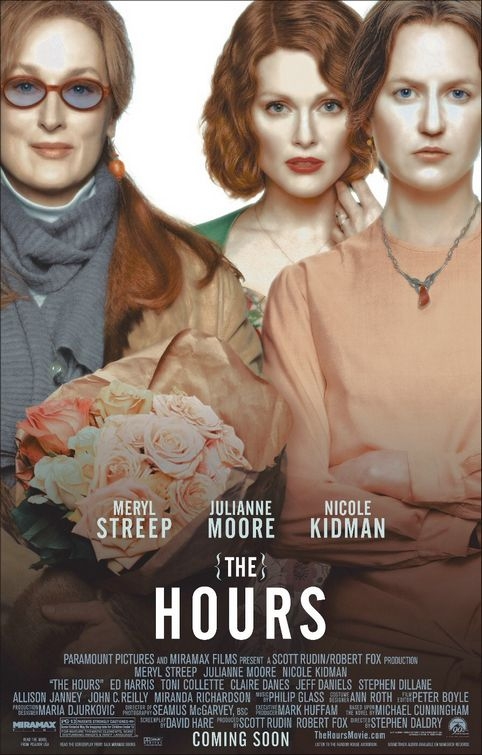 The Nose. Much hubbub has been made about The Nose. Specifically Nicole Kidman’s prosthetic nose in her role as Virginia Woolf in the film adaptation of Michael Cunningham’s acclaimed novel The Hours. Apparently test audiences didn’t even recognize her in the film, and wondered if they had missed something. But The Nose is hard to miss, as it not only completely disguises the normally perky-nosed Kidman, but it completely dominates her face, and the screen. As she speaks in a husky voice, peering down her nose with sharp, intelligent eyes, you really can’t help but look. And, almost instantly, you accept her not as Nicole Kidman in disguise, but as this odd, witty, frumpy, intelligent, sexy, and more than a little scary woman that struggled with severe depression that finally drove her to commit suicide in 1941.

Kidman is only one of the powerhouse acclaimed actresses who anchor the three stories woven together (loosely, or perhaps not so) in The Hours. We share one day in the lives of three women: Woolf, in 1923, as she begins to write the novel Mrs. Dalloway; Laura Brown (Julianne Moore), a 1950s housewife, with a perfect husband, a perfect young son, and another child on the way, but who is quietly imploding in suburbia; and Clarissa Vaughan (Meryl Streep), a modern 50-ish New Yorker who is spending the day planning a party for her old friend (and old love), a poet (Ed Harris) who is dying of AIDS.

Woolf’s own novel Mrs. Dalloway serves as the thread weaving together the three stories. As Virginia poises her pen to conjure lines from the story, the words seems to spill out of the pages of the book that housewife Laura is sneaking off to read. And, with the modern characters sharing the names of characters from the novel, the contemporary portion is a not-too-subtle re-interpretation of Mrs. Dalloway itself.

With its noticeably clever editing, an inarguably great cast, and a score by Philip Glass that tumbles through the film likes leaves swirling down a sidewalk, The Hours might at first glance seem like a whole lot of pretentious Oscar-bait. Oscar-bait it is, but the film really is good!

The three lead actresses are in top form. Since seeing the film, I’ve heard opinions on which stories worked better than others, and no one can seem to agree. Julianne Moore perhaps has the most difficult role, as housewife Laura shares her day with mainly only her young, trusting son (who has a look of constant concern for Mom on his face). Her struggle is mainly internal. Laura’s suburban claustrophobia and desperation is tricky to convey on film (as opposed to the more revealing written word), but Moore, as we’ve seen in Far From Heaven, is more than up to the task. Nicole Kidman, on the other hand, has the power of Woolf’s words themselves on her side, and her attempts at communicating with her husband (Stephen Dillane) and sister (Miranda Richardson) are a fascinating peek into a troubled mind. Finally, Streep’s Clarissa is a busy, successful woman surrounded by people she loves, but she still struggles with her own unhappiness and regrets.

The Hours is profoundly moving, and after the screening, I realized that if I was feeling remotely fragile that evening, I probably would have been a blubbering mess at the end of the film. I appreciated the film for showing the complexities of women characters, not necessarily as orbiting around their lovers and/or families, but dealing with their own personal struggles as individuals. As the themes of depression, regret, life choices, and the perfect memory are universal, The Hours becomes a film for everyone who has ever found themselves out-of-sorts in their own lives.