Well, now here’s a view of the near future that makes me want to wrap myself in copper mesh…
By Lindaon July 25, 2014
0 Comments
Our Rating 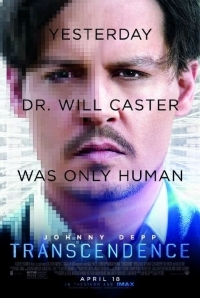 Going into a sci-fi movie, I always really want it to be good. There just about nothing more satisfying than sci-fi done really well. It can introduce you to an alternate world, bend your mind, and even change the way you look at things. Transcendence, to give it some credit, has a lot of really interesting, thought-provoking ideas. It just seems like it would work better as Season One of a great new TV series.

The film opens with a string of terrorist acts aimed at artificial intelligence labs, and the great minds behind the technology. Celebrity researcher Dr. Will Caster (Johnny Depp) is shot point-blank at his own lecture. At first, it seems like he will be okay. But it turns out that the bullet was laced with radioactive material: He is doomed to die from radioactive poisoning within a month (clever assassins!). The anti-technology radicals behind the chaos claim that the scientists, by attempting to create a thinking, sentient machine, are playing God. And you know what? I can kind of see their point.

Lucky for Will, he and his co-researcher wife Evelyn (That Nice Rebecca Hall) and their friend and collaborator Max (Paul Bettany) have access to a master computer and a whole lot of electrodes. After all, a colleague supposedly successfully uploaded a monkey’s brain waves into a computer… why not try it with Will, rather than losing him completely? Before you can point your finger in the air and say, “Science!” Will’s soul has left the confines of his material body, and his voice calls to his wife from the computer.

Transcendence poses the questions: If a human mind were given the limitless capacity to learn, plus the functioning speed of a computer, what could be accomplished? Would it be for good? Would it be for power? Would it end up destroying the world like in Terminator?

There is a lot presented in Transcendence, much of it thought provoking. The ideas could fill a television series and more, but the problem is that it is crammed into a two-hour movie. This means there are some abrupt timeline jumps, some glossed-over plot holes, and even a moment where one character references, ominously, a guy named Martin, and I asked myself, “Who the hell is Martin?” (I’m pretty sure he had not been named earlier in the story). In the end, we are left with images and ideas, but no time for emotional core. It’s too bad I didn’t care more for the characters, because I found myself not really hating the rest.

Any opportunity for some really interesting discussions regarding A.I. are wasted. The Blu-ray special features are the same ol’ short featurettes with some sound bites from the actors and crew, plus scenes from the film. The only interesting takeaway was a scientist predicting that artificial intelligence, as portrayed in the movie, is only 30 years away. Yikes!