Tim Burton’s journey down the rabbit hole is something of a cinematic mish-mash: partly fantastic, partly disappointing… and, entirely, needlessly in 3D. 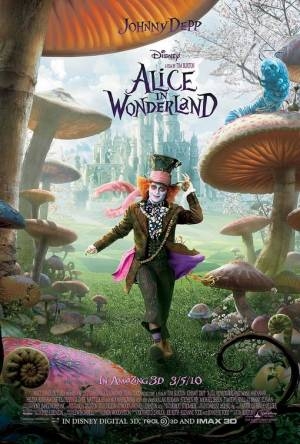 The film, which blends live action and heaps of CGI, finds a 19-year-old Alice (Mia Wasikowska) returning to Wonderland – a place she’d grown to believe was just a dream – and reconnecting with its wacky and weird inhabitants. Among them are the colossally craniumed Red Queen (Helena Bonham Carter), the dreamy and squeamish White Queen (Anne Hathaway), the Tweedles Dum and Dee (Little Britain’s Matt Lucas), the sage blue caterpillar (voiced by Alan Rickman), and the weirdest and wackiest of them all: the Mad Hatter (Johnny Depp).

Long story short, there’s governmental unrest in Wonderland, with the Red Queen having usurped the throne and holding court over its terrorized denizens. The White Queen’s been banished, and only the slaying of Red’s beloved Jabberwocky will right the shifted-power wrongs. Per an ancient scroll, the only champion up to that task is Alice so, you know, it’s handy she drops in.

Filled with Burton’s distinct visual stylings – from the curly-Q tree branches to the asymmetry of just about everything – the film is a feast for the eyes. Well, sort of. The pointless use of 3D technology does nothing to enhance the experience. In fact, it actually detracts from what could otherwise be a stunning piece of cinema. The tinted 3D glasses dull the colors onscreen and, given Burton’s love for dark and gloomy set pieces, much of the detail is often lost. In my opinion, Alice would have worked just fine (and been much brighter, palette-wise) as a regular two-dimensional film.

Thankfully, the splashes of color that do explode come courtesy of the cast. Both Depp and Carter are excellent, with the latter truly relishing her role as the story’s petite, Napoleonic villainess. Not surprisingly, Depp is equally wonderful and imbues his Hatter (whom many, including Moviepie’s Linda, find frightening-looking) with heart, charm and a sort of subtle sadness. The film comes to life whenever either one of them appears.

Unfortunately, the same cannot be said of Alice, who’s something of a cipher and the least interesting character in her own movie. The filmmakers were clearly more concerned with building the wild and whimsical world in which she finds herself than in giving the audience a compelling heroine.

While some scenes may prove unsettling for younger viewers – more than once I thought, “Oh, this will give children nightmares!” – Alice in Wonderland is entertaining overall, and should be a solid movie-going option for middle-schoolers and their parents come spring break.